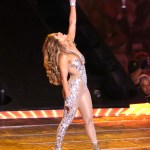 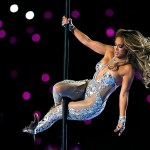 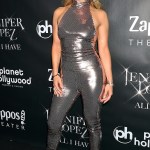 Jennifer Lopez and her ex-boyfriend Diddy reunited at her final Las Vegas residency show! See Diddy in the audience!

That’s a wrap! Jennifer Lopez finished up her Las Vegas residency All I Have on Sept. 29 and tons of celebrities came out to support her, including her ex Sean “Diddy” Combs! The judge from The Four was spotted excitedly shaking someone’s hand and waving to another pal inside the venue before sitting down to watch the sold out show. He was also spotted meeting up with the star of the show inside. You can see photos of JLo and Diddy’s reunion on Just Jared.

After the show, JLo and her boyfriend Alex Rodriguez walked the red carpet for the after party together at Mr. Chow at Caesars Palace. She stunned in a metallic jumpsuit with strappy heels. The Second Act star accessorized her glamorous ensemble with multiple silver band bracelets and hoop earrings.

Diddy showed up to Jennifer Lopez’s last Las Vegas show. He came to get his girl back 👀 pic.twitter.com/CQrBrNZ55X

Ahead of Jennifer’s final shows, we caught up with her beau, who could not be more proud of her record-breaking residency. “I just want her to celebrate because the three-year residency has been an enormous success,” A-Rod told HollywoodLife EXCLUSIVELY. “She’s literally broken records every day for the last two weeks and she has four left so I just want her to enjoy it and go out with a bang.” Well it looks like she did just that!