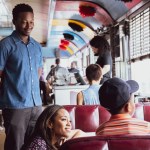 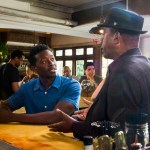 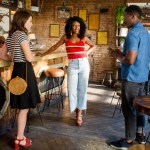 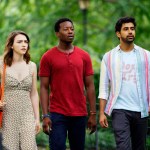 ‘God Friended Me’ premieres Sept. 30, and the series is one you simply can’t miss. HL spoke EXCLUSIVELY with star Violett Beane about the ‘uplifting’ show which follows an atheist who gets a friend request from God.

God Friended Me is one of the most highly-anticipated shows of the 2018 fall TV season. The show follows Miles Finer (Brandon Micheal Hall), an outspoken atheist who suddenly gets a friend request from “God” on Facebook. Once he accepts the friend request, Miles begins to get friend suggestions from “God.” HollywoodLife talked EXCLUSIVELY with Violett Beane, who plays Cara Bloom on the show, about what to expect from this comedy series.

She teased that Miles “inadvertently becomes a component of change” in the lives of the people “God” suggested. Cara is one of the people, and she’s “struggling with the fact that her mom left when she was a little girl, and she came to New York to find her and she has but she doesnt know what to say to her or how to start that relationship.” Cara and Miles team up to find out who’s behind the “God” account as well.

“The show in general is really, really uplifting,” Violett told HollywoodLife. “I think in the world that we’re in right now we need a show like this. When the episode ends, you can kind of walk away with a good feeling, and I think that’s something I enjoyed when I was reading the pilot script. With Cara, she’s a journalist so she loves a story and she’s really excited to help people, and I think that’s really special as well.”

The show will also start a conversation about religion in today’s world. “I think more than anything the show wants to open a dialogue between people,” Violett continued. “All of the main characters on the show and the guest stars, we all have different backgrounds. All of our characters have different religious views on the world or none at all, and I think that’s kind of enabled us to open up an unbiased conversation and to get the viewers talking about it as well.”

Violett also noted that the show is meant to “get us talking about our connections with each other and less so about who God is or what God is or if there’s a God, but more so how we can be there for each other and how can we listen to one another even if we don’t see eye to eye.” Incorporating the social media element is perfect for today’s audiences. Violett said: “We’re all on social media, right? And it is a way to connect with each other, and I think when it originally started that’s what it was about, but it’s kind of morphed into something else. I think the show is trying to bring it back to that, abut how we can connect in a disconnected world.” God Friended Me airs Sundays on CBS. The series also stars Suraj Sharma and Joe Morton.