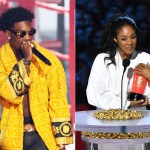 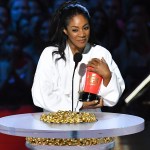 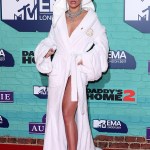 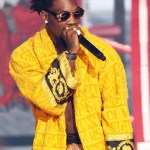 Nothing says IDGAF by heading out the door before you’ve even put your clothes on. See stars like Rita Ora, SIA and more who rocked their glorified towels among the public’s scrutinizing eye.

You’ve made the A-List when it’s socially acceptable to wear a bathrobe in public. Some celebrities’ schedules are so slammed, pulling on jeans and a T-Shirt won’t make their itineraries. And for other fashion-forward stars, a bathrobe is an intentional statement on the red carpet and stage! Offset, 26, wore a Versace bathrobe to perform at the 2014 BET Hip Hop Awards, and Rick Ross, 42, took a picture by his yacht in a similar piece from the Italian luxury label. You see, the Martha Stewart bathrobes that Target sells don’t quite fit the bill for the glamorous rap lifestyle (although we love those too). Really, there are all kinds of ways to rock this post-shower wear, so let’s take a look!

Tiffany Haddish, 38, literally had no time to put clothes on…save for her underwear. The Night School actress, who was playing host for the night, did not expect to be on the receiving end of a trophy at the 2018 MTV Movie & TV Awards on June 16. After it was announced she won Best Comedic Performance for her role in the 2017 film Girls Trip, the comedian rushed back onstage in only a bathrobe. You know, the kind that comes complimentary with your hotel room! After accepting her award, Tiffany told the crowd, “They didn’t tell me that I had won…I was changing and they were like, ‘Put those panties back on!’”

Rita Ora, 27, also hosted a major award event, but she planned out her bathrobe ensemble a bit more. The “Girls” singer showed that Versace doesn’t monopolize luxury lounge wear in a bathrobe and head towel set from Palomo Spain’s Spring 2018 collection. Oh, and add $7.8 million’s worth of Lorraine Schwartz diamonds to that. Rita rocked her glamorous bath wear  from the red carpet to the stage, where she both announced wins and performed, at the 2017 MTV Europe Music Awards on Nov. 12, 2017!

Check out the gallery above for more photos of celebrities in their bathrobes. We think SIA’s picture takes the crown for the most unexpected bathrobe moment!