What a trio! Cara Delevingne, Kendall Jenner and Anwar Hadid all look like they had fun partying together in new pictures from a night out in Paris!

Did our invite get lost in the mail? BFFs Kendall Jenner and Cara Delevingne partied it up with Anwar Hadid at the Off-White dinner on Sept. 27 in Paris and there are photos to prove it! The trio were celebrating designer Virgil Abloh after Kendall and Bella Hadid slayed his runway during his Paris Fashion Week show. In the fun pictures from the evening, Cara and Kendall stuck to their close and cuddley ways, with Cara sticking her face in Kendall’s cleavage, and Kenny making a kissy face for the camera. The models were also photographed posing with Anwar and Kerwin Frost, a DJ. Kendall stood next to her rumored beau Anwar in the pic and was all smiles, especially after she was caught out and about during the day with a hickey on her neck!

Interestingly, Anwar was also seen with a hickey on his neck a few days prior, and it just seems like these two can’t get enough of each other! After they were spotted making out on several occasions in NYC and Milan, these pics now confirm they have taken their romance to the city of love! Another couple who has made their relationship “Paris official” is Cara and her girlfriend Ashley Benson! The Pretty Little Liars actress sat front row at the Balmain show as her GF strut down the runway in one of her only Fashion Week shows. We’d love to see Ashley and Cara double date with Kendall and Anwar — that would be one fashionable squad. 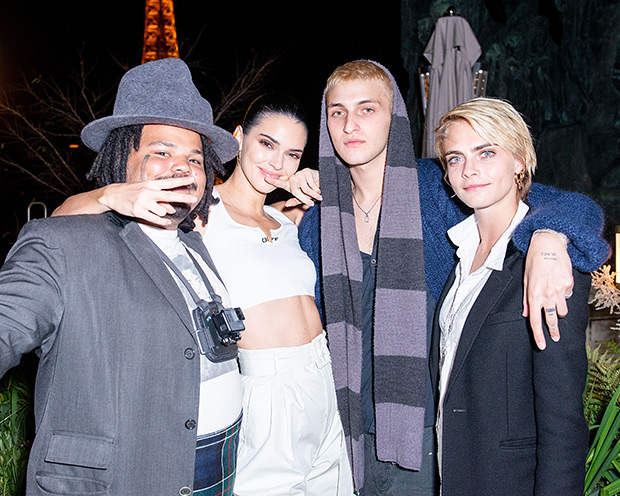 Obviously Kendall and Anwar have yet to confirm their romance, even though they’ve been seen locking lips from time to time. HollywoodLife.com hears EXCLUSIVELY that while they’re in no rush to make things official, they’re really enjoying their time together. “Kendall’s having so much fun with Anwar, she’s not putting labels on it but he’s going out of his way to make her feel like a queen and she’s loving it. It’s not just a physical attraction, although she does think he’s sexy as hell, they connect on a lot of levels,” an insider close to Kenny told us. “Anwar is a deep thinker with a lot of passion for helping the world and Kendall appreciates that, it’s a turn on for her. She knows he’s a guy with a lot of integrity and that makes her feel very safe. She can trust him.” When in Paris!