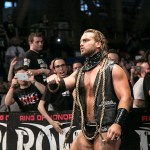 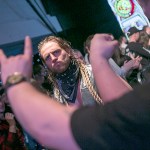 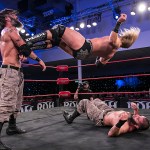 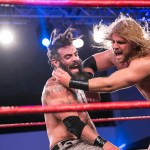 It’s almost time for Death before Dishonor and Adam ‘Hangman’ Page is SO hyped for Ring Of Honor’s big event. He EXCLUSIVELY dishes on what to expect, his run-in with Joey Ryan at All In, the WWE, and who he wants to face in ROH.

One of the biggest moments of the year in professional wrestling didn’t involve Roman Reigns or Brock Lesnar. It didn’t involve Daniel Bryan or Ronda Rousey. In fact, this moment – one that will be considered a highlight of 2018 – happened at All In. After Adam “Hangman” Page defeated “Bad Boy” Joey Janela in a devastating street fight, the lights darkened in the Sears Centre in Chicago, and out came…eight men in giant inflatable penis outfits. It was insane, ridiculous and…fun as hell. It also was a testament to Adam’s talents as a wrestler, as he was able to go from brutal hardcore wrestling to comedy in a blink of an eye.

Adam won’t be laughing when he joins his teammates in Bullet Club – Cody, “The Villain” Marty Scurll, and The Young Bucks – when they take on New Japan Pro-Wrestling’s CHAOS faction at Ring Of Honor’s Death Before Dishonor. Ahead of the Sept. 28 event (which can be ordered on PPV and on ROH’s HonorClub), the 2017 ROH Breakout Star Of The Year speaks on how important the Death Before Dishonor event is for Ring Of Honor, his All In highlight, and the wrestler he’s itching to get his hands on in ROH (spoiler alert: it’s not the man he battled at All-In.)

Hollywood Life: What makes this ‘Death Before Dishonor’ weekend so important for Ring Of Honor?

Adam Page: It is a big weekend not just for Ring Of Honor, but New Japan has their show in Long Beach on Sunday. It is a big weekend for all of us. We have a live pay-per-view, a Ring Of Honor pay-per-view, which I feel like ROH always delivers. There is a huge ten-man tag match with us against Chaos, which should be something else. We got TV the next night, and then Long Beach with New Japan on the 30th. So, the [weekend] is big for all of wrestling in general. It should be a really good time.

Is there anyone – currently in ROH or someone you wrestled in the past — that you’d like to get in the ring with?

I would like to get in the ring with a lot of those guys, but as for people that are in Ring of Honor right now? I would say Jeff Cobb. He has just shown up in Ring Of Honor and he is something that I have had the briefest encounters with, so I would say off the top of my head, it would be Jeff Cobb. He would be that kind of guy.

You may have been involved in the greatest wrestling highlight this year at All In. What are your thoughts on that, and All In’s success, now that we’re a few weeks removed from it?

All In was a huge success all around for Matt [Jackson] and Nick [Jackson] and for Cody. For me, for Marty, for Kenny [Omega] and everybody involved in any way possible. It was excellent, with over 11,000 people in attendance and who knows how many people watched at home. I am sure many people were watching from home. It was a huge accomplishment and one of the biggest wrestling accomplishments for any company outside the [WWE].

How [All In] changes the course of wrestling is yet to be seen, since we are only a few weeks removed from it but I think that will be a point that a lot of people will look at and say it was a major turning point for wrestling.

To be a part of it was a huge thing for me. I think the most important thing for me at All In is that this wasn’t run by WWE or Ring of Honor or New Japan. It was a group of friends that had an idea for what it would look like if they did it. And to know that three people and people around them could out something like this together and to get the support and the attendance and the eyeballs that it did it speaks to the important part of all of it.

How does it feel that everyone is going to remember you from that night? Because it was brilliant.

It feels good. I don’t know if I am too excited on why they will all remember me and the things that happened after the match but I got a lot of positive responses after the show about the match.

I was a little worried about the after match stuff, that it would kind of take away from the match [with Joey Janela] itself but I got a ton of feedback from all the fans. They said that it was their favorite match and things like that. A lot of people thought that and that was great! The fact that what happened afterwards was such a funny Easter egg from what just happened.

But, I am proud of it all because it is something that came from my brain, our brains. And to have it be that memorable and that talked about..

The fact that you allowed yourself to even go there is amazing..

(LAUGHTER) One thing I want to mention about all that is another success with All In. I don’t want to make it look like I am bragging too much, but I will put this over as my friends’ show but I guess another success is that there was so much variety. So many different kinds of matches. We had legitimate styles, long singles matches, [Kazuchika] Okada and Marty, a six man and a hardcore match. It shows that there was so much variety.

Cody had his emotional, just one of the most emotional moments I have seen in wrestling — what with him capturing the NWA title — immediately followed by a hardcore match. It was like a dream sequence of me getting dick flipped. (LAUGHTER) I think that speaks to the variety and wrestling needs variety. People like different things and I think no matter what your favorite is, people appreciate variety. Whether it is there piece of the pie, they had a lot of different things to latch onto.

What do you need to achieve in 2019 and beyond for your career and character?

I guess, I would be hesitant to say this but I will say it: when I was younger and just getting into wrestling — even in the first few days of Ring of Honor — for me, it was and wrestling was all about me checking off all these boxes to get to the WWE. I wanted to make a living there. And that is what it all was for me.

For a lot of wrestlers, no matter what they did, they saw the WWE as the end goal. I think that sometime in the middle of all that, it started changing for me. I know that has changed a lot for other people, too.

As far as character development and creative, I have to make sure that I am always going upwards and not downwards. I never want to be stagnant and I want to have fun and enjoy the art of putting together a match. Once I let go of all those old concrete goals — that, looking back, seem foolish now – that is when I started to be successful. Now, my goals are to just have fun with my cohorts, to be creative, and give the fans something to sink their teeth into.

Adam Page will be in action at Ring Of Honor’s Death Before Dishonor, beginning at 9 PM ET / 6 PM PT. For info on how to order, click here.