Paulina Gretzky put on a happy face last night with Dustin Johnson to celebrate the Ryder Cup, just two weeks after deleting all trace of her longtime partner on her Instagram.

Whatever is going on between Paulina Gretzky and Dustin Johnson was put on hold last night, Sept. 26, at the Ryder Cup gala dinner at the iconic Palace of Versailles, where she joined her fiancé to celebrate his golf career. Rocking a stunning, curve-hugging gold gown, Paulina had her golf pro beau of five years snap photos of her on the steps of the palace, before joining the group of fellow golfers and their wives and girlfriends for a group shot. Tiger Woods and his girlfriend, Erica Herman, posed on the steps, as well as Rickie Fowler and his fiancé Allison Stokke. Paulina also struck a kissy face for a selfie with Brooks Koepka‘s wife, Jena Sims. While Paulina and Dustin both smiled for the camera last night, it appeared their relationship was on the rocks two weeks ago, when the 29-year-old socialite deleted all of her photos with Dustin from her Instagram profile. After the Dustin was untraceable on Paulina’s social media, rumors swirled that he had struck up a romance with LA-based socialite, Yassie Safai.

In response to the rumors, Yassie claimed she barely knew Dustin and did not have an affair with him. Dustin eventually responded to reports about his relationship, as well, writing on Twitter, “Every relationship goes through its ups and downs, but most importantly, we love each other very much and are committed to being a family. Thank you for your love and support.” Paulina and Dustin got engaged in August 2013 after seven months of dating. They have two children together, Tatum Gretzky Johnson, 3, and River Jones Johnson, 1. 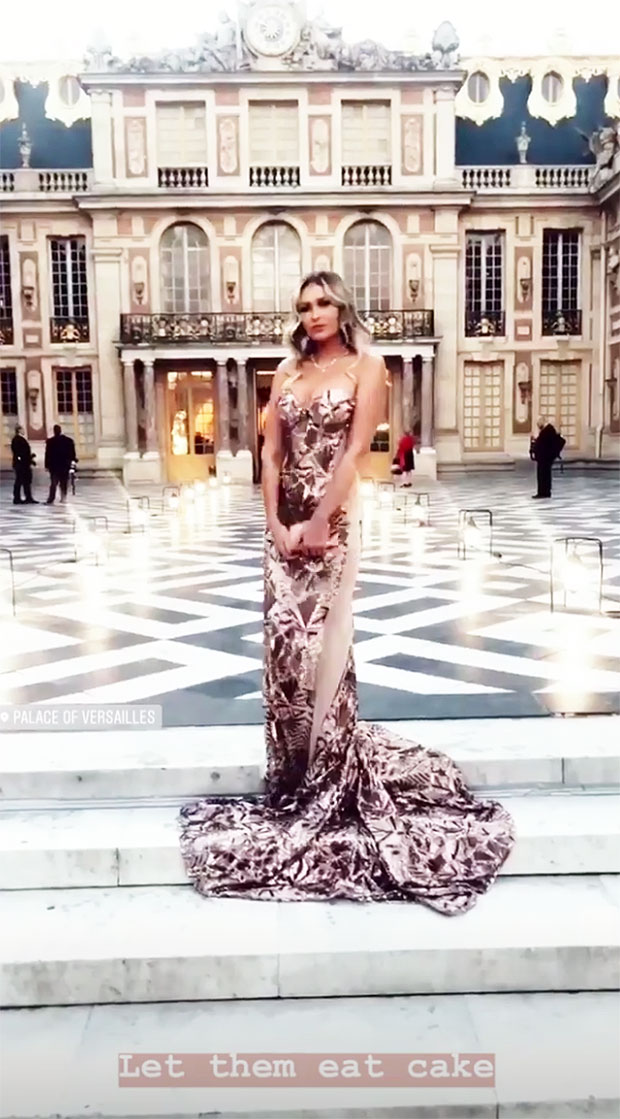 Dustin might have made up for his alleged infidelity, by taking an amazing shot of Paulina last night on the steps of Versailles, which she posted on her Instagram Story with the text, “let them eat cake.” However, Dustin, who is currently the No. 1 player in the world, is still no where to be seen on her page or in her stories. Like the saying goes, Dustin — you can’t have your cake, and eat it, too.