Beyonce has some thoughts about the hype around Cardi B seemingly copying one of her past looks, while the rapper was at Paris Fashion Week! So, is Queen B ticked off? — Here’s her take…

Beyonce, 37, has no issue with Cardi B, 25, regarding her attire at Paris Fashion Week. She’s the type of person that feels like there’s enough room for all females to rock whichever style they please, despite some outfits appearing similar to others — which is what happened to Cardi on September 25, while at PFW. The rapper stepped out in a Beyonce-esque ensemble, wearing a plunging, long-sleeve Michael Costello gown with a high left-leg slit. That same look was compared to Beyonce’s black dress, which featured double-leg slits, that she wore to the Grammys in January. (You can see the comparisons below)

“Beyonce is well aware that she is a trendsetter. She knows that people look up to her and even want to emulate her style. So, when anyone has a similar look to her, she’s flattered,” a source close to the singer tells HollywoodLife.com EXCLUSIVELY. “And now that people are comparing Cardi’s look to her, she is going by the saying, ‘Imitation is the sincerest form of flattery.’ Beyonce doesn’t think it’s shade and actually thought Cardi looked great. Beyonce doesn’t mind the comparisons.”

Cardi was caught in a similar look alike situation just one day after her Beyonce comparisons — this time in a Christian Cowan lavender pantsuit with fur. She wore the lavender number during ETAM’s Paris Fashion Week show, where she performed for one of the first times since giving birth. While she looked stunning in the plunging pantsuit, many fans claimed she robbed the look from Rihanna, 30. 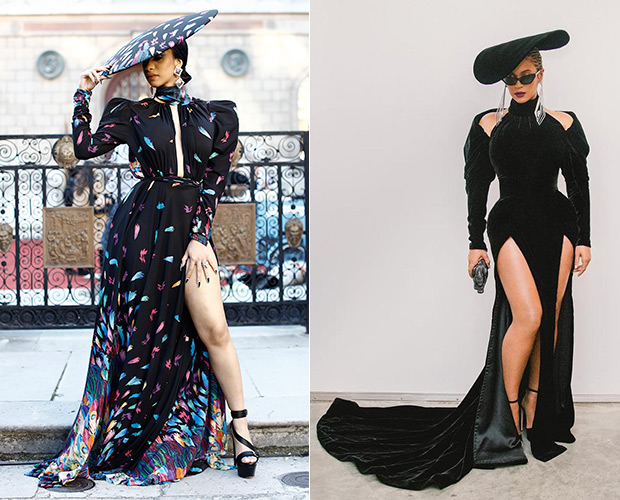 Back in March 2015, RiRi rocked a similar Barbie pink plunging jumpsuit with an oversized fur scarf around her shoulders for an appearance on Good Morning America in New York City. She also wore pale pink pointed stilettos, similar to Cardi’s. At first glance, it looks like Cardi and RiRi have the same outfit on, however, Cardi their color schemes are a bit different. — Let’s just let these stars be, and celebrate their style!