Scott Disick, is that you? The ‘Lord’ showed off a major transformation — having buzzed his head and trimmed his beard — while out car shopping with Kim Kardashian on September 26! See the photos!

Scott Disick, 35, must’ve hit the barbershop recently, because he’s got a brand new do’! The self-proclaimed Lord showed off a fresh buzzed head and clean-trimmed beard while out with Kim Kardashian, 37, on Wednesday, September 26. Kourtney Kardashian‘s ex, and baby daddy, went car shopping with her sister in Calabasas, where cameras appeared to be filming the two. — Check out Scott’s new look, below!

The two were reportedly browsing around Scott‘s go-to dealership, Calabasas Luxury Motorcars while KUWTK cameras were seeming filming them. Scott, with his new transformation on full display can be seen on his phone, as Kim appeared camera ready (duh). The father-of-three was most likely texting his much-younger girlfriend, Sofia Richie, 20.

While checking out a red Mercedes Benz G-Wagon Kim donned waist-cinching, baggy cargo pants that were tight at the ankle. She wore an all-black, long-sleeve turtleneck top with a hint of red detail near the neck, and topped off her look with bright, white boots. The Keeping Up With The Kardashians star even accessorized with small black shades. She wore her brunette hair down and wavy. 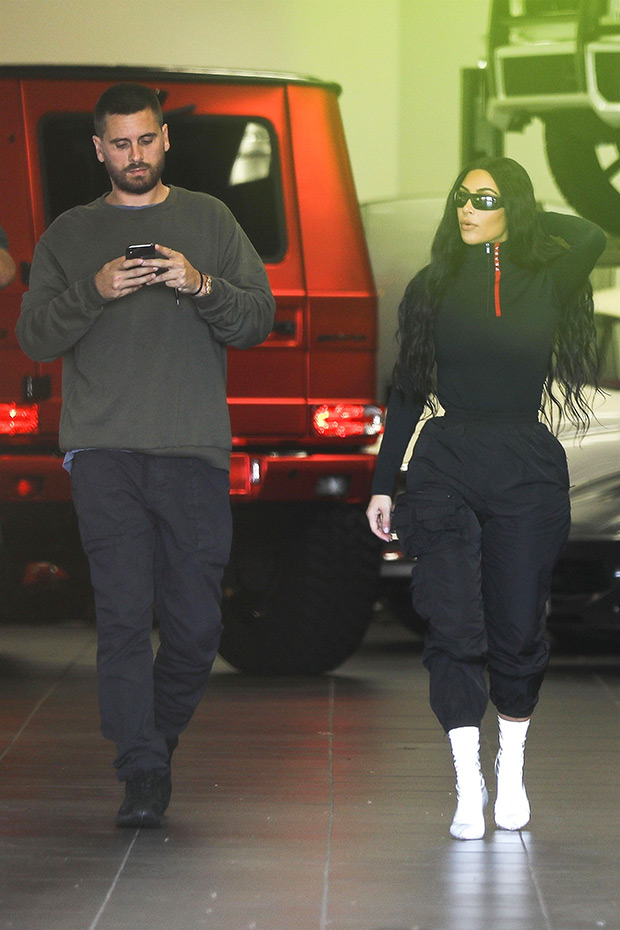 The outing came soon after an episode of KUWTK (on September 9) featured Scott and his ex, Kourtney arguing after he introduced his girlfriend, Sofia to their three kids, Mason, 8, Penelope, 6, and Reign, 3.

Scott and Sofia were first romantically linked in May 2017 when they were spotted cozying up on a yacht in the south of France during the Cannes Film Festival. Nonetheless, Sofia — who previously dated Justin Bieber, 23, in September 2016 — denied that she and Scott were romantic at the time. Oh, how times have changed!