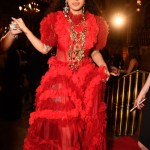 First Cardi B accused Nicki Minaj of ‘stopping her bag.’ Then, Iggy Azalea reportedly said Nicki tried to get her fired from a Super Bowl ad. No wonder Nicki’s now bragging about ‘stopping’ all the bags!

We were going to write this post, but #NickiStoppedMyBag (kidding!) Much how like Taylor Swift adopted the snake after Kim Kardashian posted that now infamous “Famous” conversation, Nicki Minaj, 35, decided to twist a rival’s insult – in this case, Cardi B, 25, original claim that Nicki “stop[ped] my bags” — into a positive. In the wake of Iggy Azalea, 28, reportedly accusing Nicki of attempting to get her booted from a 2018 Super Bowl commercial, the “Chun Li” rapper gleefully adopted the fan-created #NickiStoppedMyBag hashtag. The meme involved all the absurd ways Nicki stopped them from “getting their bag.” (“I went to the mall and this girl credit card declined, she responded with #NickiStoppedMyBag” “I wanted Chick Fil A Sunday and they were closed. I know Nicki is behind this. #NickiStoppedMyBag).

How could Nicki NOT get in on this action? “What about it? I’m going undercover today to stop more bags,” she tweeted when a fan revealed their Uber driver was named “Chun Li.” “Bag STOPPED! Carry on!” In addition to this, Nicki retweeted some of the best memes. “You never noticed the double entendre in “bag stopped, carry on”. My carry on luggage was stopped when I tried to board the flight. My carry on bag was stopped. Bwahahaaaahaha. I love writing raps #NickiStoppedMyBag”

Where did #NickiStoppedMyBag came from? Following Nicki and Cardi’s explosive fight at New York Fashion Week, Cardi seemingly accusing Nicki of sabotaging her. “I let a lot of shit slide! I let you sneak diss me, I let you lie on me, I let you attempt to stop my bags, f*ck up the way I eat! You’ve threatened other artists in the industry, told them if they work with me you’ll stop f*cking with them,” Cardi wrote on Instagram. Jason Lee of Hollywood Unlocked reported that Nicki prohibited Future from featuring on Cardi’s track “Drop,” allegedly threatening to drop him from their joint tour if he did.

The other day I had to pee, she walked by & said peeing is stupid. #NickiStoppedMyBag keep it going. Picking the best ones for the next episode of #QueenRadio https://t.co/TXjIKTbPH3

When @NICKIMINAJ reaches out to stop the bag #NickiStoppedMyBag pic.twitter.com/Pl7LnoYxed

Nicki supposedly tried to stop Iggy from appearing in Monster Products’ 2018 Super Bowl commercial. Iggy allegedly vented about this attempted “stopping” in a series of DMs to a fan. “The whole NBC team called me and said they wanted to let me know she called and said not to work with me because I am a homophobe and they wanted to let me know NBC approves and supports me, but that she basically tried to get me kicked off,” Iggy allegedly said.

Similarly, Remy Ma accused Nicki of sabotage in 2017, according to Page Six. “When you’re trying to stop my bag or trying to stop me from taking care of my children, I have a problem with that.” Well, call Nicki “Baggage Claim,” because she has no problem in being accused of “stopping bags.”