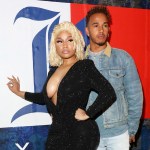 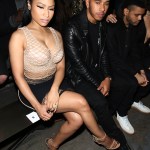 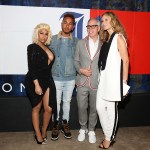 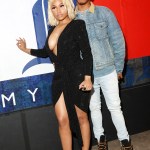 This may confirm Lewis Hamilton and Nicki Minaj’s rumored romance! They took a four-wheeler for a spin in the Dubai sand dunes, then posted matching Instagram photos on Sept. 26!

Nicki Minaj, 35, let Lewis Hamilton, 33, take the wheel during their getaway in Dubai. Smart, considering that Lewis is a four-time Formula One champion. You know, one of the highest titles a race car driver can achieve! Lewis also took a seat behind the “Barbie Dreams” rapper on the four-wheeler, then each posted a snapshot of their Sahara adventure to Instagram on Sept. 26. “Caribbean tingz what I on. Me & Lewis gettin paper like what ink dry on. #Versace 💧,” Nicki captioned the selfie of her and Lewis with their riding helmets on. Nicki’s reminiscing on their lovers’ trip, since she touched down in Brazil on Sept. 25, a day before her TIDAL subscriber concert in São Paulo.

This is the third spotting of Nicki and Lewis, together, in September! The pair was last seen leaving an elevator in Dubai on Sept. 24, which The Shade Room originally posted. Before jetting off to one of the United Arab Emirates, the rumored lovebirds posed for pictures together at Lewis’ launch party for his collection with Tommy Hilfiger at New York City’s Public Hotel on Sept. 10! They were even photographed slipping out of the party to grab an Italian dinner at Carbone, and then sharing an umbrella outside afterwards. From umbrella sharing to speeding around the Dubai desert, this romance is seriously heating up!

Still, the “Chun-Li” rapper is avoiding titles, as we’ve told you. “It’s early days for Nicki and Lewis, so she doesn’t want to jinx anything by saying they’re dating, but they’re definitely getting close,” a source close to Nicki EXCLUSIVELY told HollywoodLife on Sept. 24. “There was an instant attraction between them the first moment they met, but neither of them wanted to jump straight in to anything serious, so they’ve been taking their time and getting to know each other.”

But Nicki and Lewis may be taking their fling for a (brief) spin. We also learned of Lewis’s play boy past! “This is at best a work in progress to be a relationship because Lewis definitely loves his freedom and loves to date beautiful women so for him to settle down is not something he is exactly interested in, but he does like Nicki,” another source EXCLUSIVELY spilled to us. True — he’s been romantically connected to beauties like Rita Ora and Winnie Harlow!