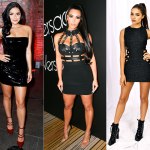 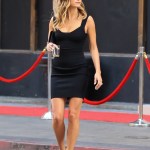 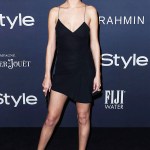 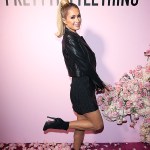 Kendall Jenner and Bella Hadid both slayed in little black dresses at the Chrome Hearts party. See their sexy looks and decide which model rocked the LBD better!

If it’s not black, put it back on the rack! That’s clearly the motto Kendall Jenner and Bella Hadid both had for the Chrome Hearts party on Sept. 25. The two supermodels both attended the Paris Fashion Week event wearing black, strapless mini-dresses with sheer tights. While their looks were remarkably similar, they each had their own unique details that set them apart from each other. The pair definitely didn’t seem to mind they had styled their ensembles similarly since they partied together the entire night, and even stopped to take some selfies!

Bella looked striking in a semi-sheer corset dress that featured a sweetheart neckline and a zipper down the front. She accessorized the look with three silver cross necklaces, two bracelets, hoop earrings, and a faux fur leopard-print bag by Chrome Hearts. She styled her straight lob hairstyle by clipping pieces behind her ears. Bella rocked a fierce makeup look thanks to intense eyeliner wings, but balanced the dark eye look out with a subtle pink lip.

Kendall also opted for an edgy look, by choosing a leather LBD with a gold ruffle up one side. She skipped out on the jewelry, letting her dress speak for itself. The Keeping Up With The Kardashians star left her dark locks down, with it tousled over her shoulders. Her makeup was less dramatic than Bella’s with a thin line of eyeliner, a bold brow, and a bubblegum pink lip.

We think both Kendall and Bella look like total rockstars in their chic black dresses, but we want to know what YOU think. VOTE below to let us know whose LBD at the Chrome Hearts party you prefer! Honestly, there’s no wrong answer – they both absolutely killed it!