There’s a wild theory going around that Meghan Markle’s hairstyle has something to do with the widespread pregnancy rumors she’s at the center of! — Here’s what fans are cooking up!

Could Meghan Markle‘s hairstyle be a secret sign that she’s with child? — That’s what fans and one savvy journalist believe after a thought-provoking theory just arose about the Duchess of Sussex, 37. If you’re an avid royal-follower, you would know that Meghan typically wears her hair down with loose waves or in a messy low bun. However, she opted for a poker-straight blowout on Monday, September 24, when she attended the Coach Core Awards held at Loughborough University with Prince Harry, 34. And, one magazine writer believes this particular hairstyle is being used as a distraction from the public focusing on her belly.

“Because I am a journalist and I care about these things, I combed through 60+ pages of the latest pictures of Meghan and found that she hasn’t worn her hair like this since at least before her wedding to Prince Harry,” Cosmpolitan’s Emma Baty wrote in a story published on Monday. Baty believes Meghan is using the new hairstyle to take the attention off her belly, ultimately to tone down pregnancy speculation.

In the piece, Baty makes some notable points in the theory, suggesting that Meghan could be using a strategy out of her sister-in-law Kate Middleton‘s book. Just days before Kensington Palace announced that Kate, 36, and Prince William, 36, were expecting Prince Louis (5 months), she debuted a new haircut in September 2017. Before that, Kate showed off new bangs just one week before revealing she was pregnant with Prince George, 5. And, with Princess Charlotte, 3, Kate had gray roots. 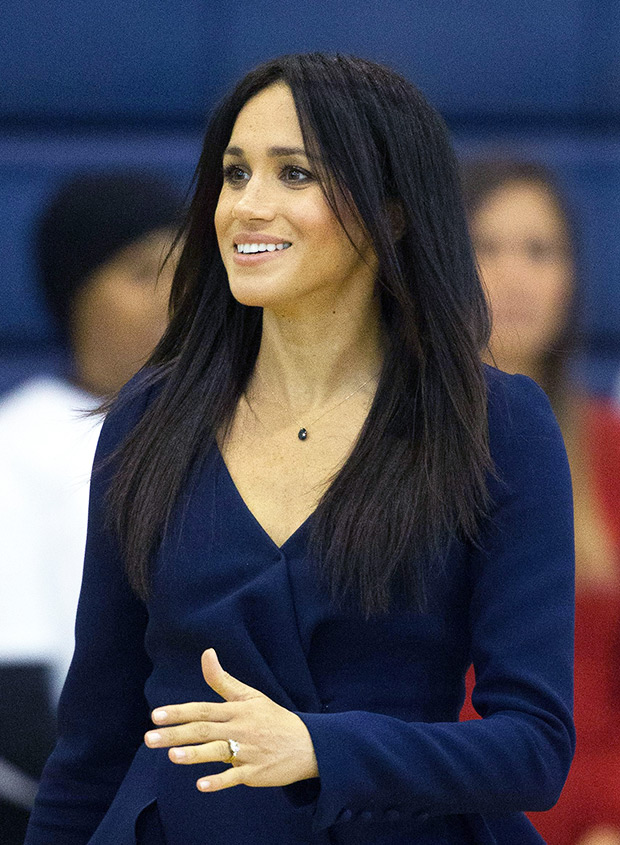 While the theory is quite interest, the palace, along with Meghan and Harry have not confirmed any pregnancy news, whatsoever. But, we can dream, right?