Will Smith turned the big 5-0 on Sept. 25 and received tons of well wishes from celebrity pals. One of the most provocative came from onetime co-star Garcelle Beauvais, 51.  She posted a throwback pic of them passionately kissing while appearing to be naked with the caption “A birthday wish for the birthday boy.” Fans flipped out that she was being disrespectful since Will has been happily married to Jada Pinkett Smith for over 20 years. Now she’s deleted the tweet and is apologizing, saying she was only attempting humor with her post.

“Ok guys it was supposed to be a funny post. My bad if I offended anyone! If you are my followers you know I’m all about lifting up people and being positive being human I made a mistake … Have beautiful blessed day,” she tweeted hours after defiantly claiming she was standing by her post. After catching heat for the super racy birthday wish, she tweeted, “>Why is everyone so sensitive today ? Lighten up it’s a Tuesday.”

>Fans took her to task, saying that Jada was going to come for her for posting a pic making out with her husband. “You better take this down fore Jada go on a Twitter rant,” one fan scolded her and Garcelle wrote back “Bring it lol!”  “Oh the red table talk gonna be LIT once Jada sees this,” one fan said. “Jada from Baltimore too?! And I know YOU KNOW what that means,” another wrote. Garcelle finally couldn’t stand the heat and got out of the kitchen, deleting her steamy post but not before everyone screen saved it.

Ok guys it was supposed to be a funny post My bad if I offended anyone ! If you are my followers you know I’m all about lifting up people and being positive 🙏🏽being human I made a mistake … Have beautiful blessed day 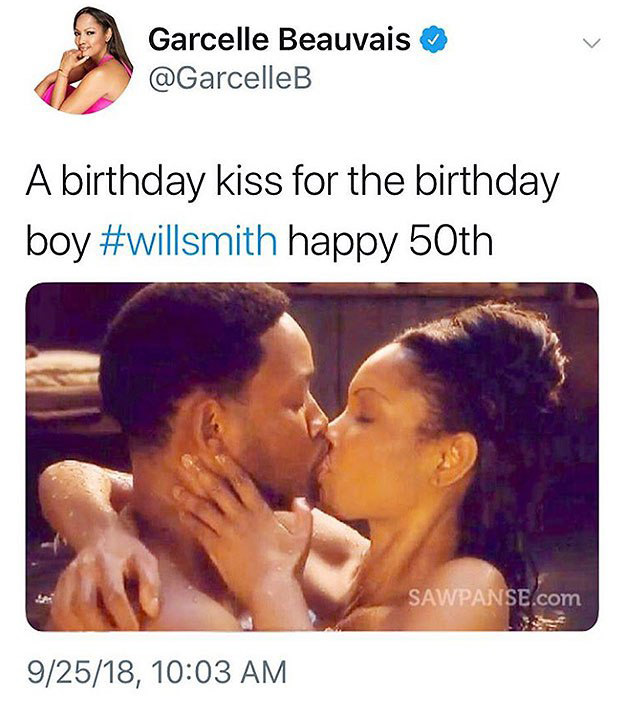 As for Big Willie, he and Jada have much bigger things to worry about than a sexy post from a former co-star. He’s bungee jumping out of a helicopter above the Grand Canyon to celebrate his birthday. He’s risking his life for a good cause, as he’s taking in donations leading up to it for global children’s education charities. Jada was on hand to watch her man’s death-defying leap, which you can tune in to watch live starting at 3pm PST via his YouTube channel here. Will is doing a big lead-up hype show before his jump so there’s still time to tune in and catch it.

Related: Will Smith Siblings: Everything To Know About His 3 Brothers & Sisters