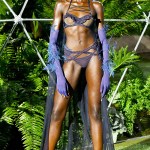 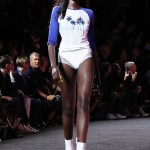 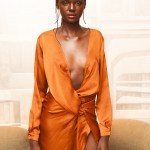 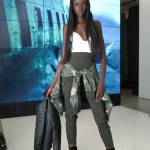 Duckie Thot should be on everyone’s radar! The model was just named a L’Oreal ambassador and she was confirmed for the 2018 Victoria’s Secret Fashion Show! — Here’s 5 facts about her!

Duckie Thot, 22, is a top model, who you need to know about! The stunning catwalk star is booking big jobs like crazy, and she’s ruling fashion month this year. Don’t know her yet? — It’s cool, we’ve got you covered! Here’s five facts about Duckie Thot!

1. Born Nyadak Thot, Duckie is an Australian model. — She was born in Melbourne to parents who had escaped Sudan’s civil war. She is one of seven siblings. When she was younger, people were unable to pronounce her birth name, which led to the nickname “Duckie.” And, it’s what she prefers to go by as a model. Her sister, Nikki Perkins is also a model, who kickstarted her career ahead of Duckie.

2. She was named a L’Oreal ambassador. — L’Oreal Paris officially signed Duckie as its newest ambassador, WWD confirmed on September 24. Duckie will make her first appearance as a L’Oréal Paris ambassador on the runway of the brand’s fashion and beauty show on the river Seine during Paris Fashion Week on September 30. Her debut campaigns for L’Oréal Paris are to be for Volume Million Lashes, Colorista, Infaillible Foundation and Rouge Signature.

3. Duckie will make her Victoria’s Secret Fashion Show debut this year. — When the show comes to New York City in November 2018, Duckie will hit the coveted VS runway for the very first time, alongside top models, including Devin Windsor and more catwalk stars. Check out her emotional reaction after finding out the news!

words can’t express how much this means to me, thank you Victoria’s Secret for the opportunity of a lifetime. #VSFashionShow pic.twitter.com/2ASIo7Wu0b

4. Duckie’s modeling resume is already off the charts. — While she may best be known as the face of Rihanna‘s beauty line, Fenty, along with her lingerie line, Duckie has done a lot of high profile campaigns. She’s done campaigns for Fenty x Puma, Moschino, Balmain and Oscar de la Renta. Duckie’s landed a slew of popular magazine covers including: Harper’s Bazaar, Marie Claire and Paper. She’s walked the runway for Rihanna, Jeremy Scott, Laquan Smith and Christian Cowan.

5. Where she got her start? — Duckie finished in third place on the eighth cycle of Australia’s Next Top Model. And, she made her runway debut at Kanye West‘s Yeezy S/S 17 show.