What a gorgeous mother and daughter! Kylie Jenner sizzled in a tight pink latex dress while holding her precious daughter Stormi Webster. We’ve got the adorable pic.

That precious face! Kylie Jenner is making a pretty good case that her daughter Stormi Webster might be the most adorable of the Kar-Jenner “triplets.” She held on tight to the beautiful eight-month-old, who got to attend her first launch party for her mogul mom’s latest cosmetics line on Sept. 21. Ky looked super sexy yet feminine with an all-pink outfit from head to toe. She rocked newly dyed long Barbie pink hair, which she  pulled back into a ponytail and wore a skin-tight pink latex mini-dress that hugged her enviable curves .But it was little Stormi who stole the show in the Instagram photo her mommy shared from the party.

Kylie’s “Angel Baby” just grows cuter with each passing day. She was dressed up for her mama’s party in a shiny lavender dress with her hair in two little pigtails atop her head. Stormi’s become quite the little footwear fashionista, rocking little white Adidas sneakers with lavender metallic stripes. Kylie is a brand rep for them now, so she can probably get Adidas to design any kind of custom shoes for her little one. Stormi has Kylie’s big brown eyes and daddy Travis Scott‘s full lips, which Kylie said was the combination she was hoping for the most between Stormi’s parents’ features.

Ky and BFF Jordyn Woods held a huge bash at her Hidden Hills estate to celebrate the launch of their first collaboration for Kylie Cosmetics appropriately titled KylieXJordyn. She had her home filled with pink mylar heart-shaped balloons and matching balls on the floor. With the KarJenners it wouldn’t be a party without either tons of flowers or balloons. In her IG stories, Kylie shared pics of the long table where all of her guests had a delicious lunch, and now that she’s 21, Kylie properly celebrated with a glass of champagne. 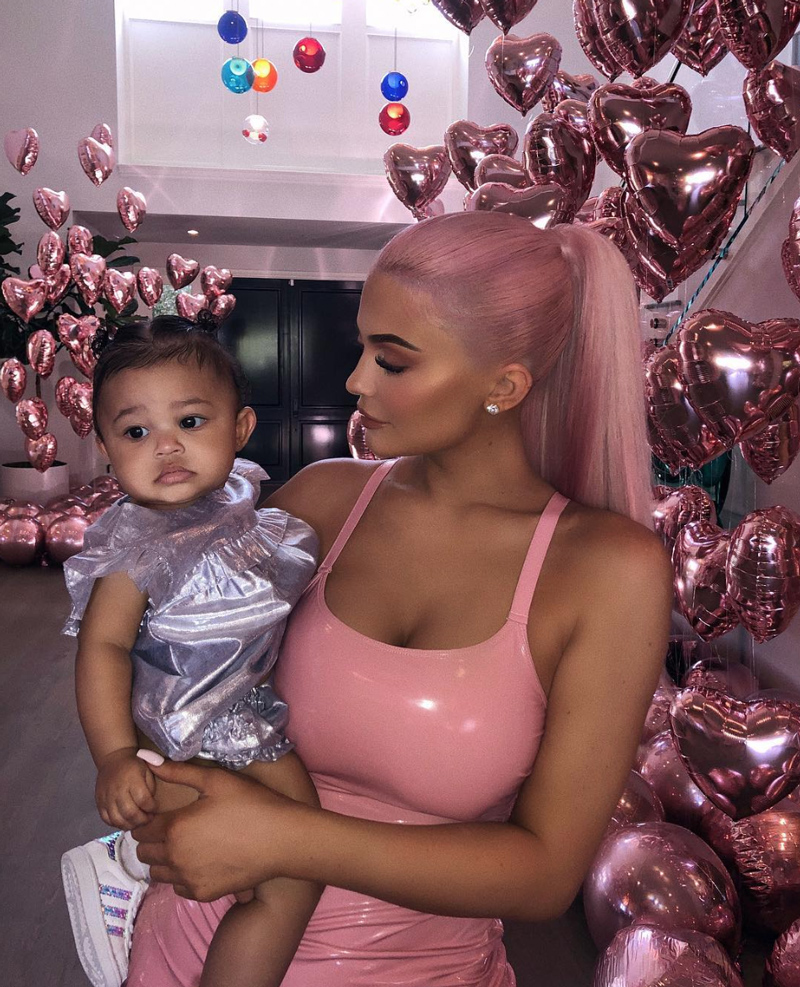 The launch party also served as a birthday celebration for Jordyn, who turned 21 on Sept. 21. They started things off early the night before  with a bash at West Hollywood’s Poppy. Of course now that they’re both now of legal drinking of age, bottles were seen throughout both ladies’ IG stories during the celebration. Fortunately neither of them were behind the wheel when cops pulled over the car they were riding in as they left the nightclub.