She may have kept her pregnancy hidden for awhile, but now it’s all baby bump all the time! Jessica just shared another photo of her budding belly. See for yourself!

In case you forgot that Jessica Simpson, 38, announced that she was pregnant with a girl on Sept. 18, she brought her baby bump out to play again. It’s only been three days since she posted a shot captioned “My Baby Love,” with her hands on her stomach, but she’s still showing her budding belly off — and we’re so glad! This time around, Jessica sported a silky trench, a long black dress and heels. But cute outfit aside, the photo looked almost identical to the first. She wore big black sunglasses again and had her hands cradling her belly the exact same way. She makes pregnancy look perfect!

But that doesn’t mean she isn’t open about the less glam aspects of carrying a baby. Between these similar baby bump shots, Jessica posted a couple pics of herself fast asleep and eating a Nutella pastry. Her sex reveal, though, was one of the cutest we’ve seen. Jessica already has two kids with her husband Eric Johnson, and she let her daughter Maxwell, 6, and son Ace, 5, play a part in the announcement. The sibs stood outside with huge black polka dotted balloons in one shot, which they popped to reveal a bunch of smaller pink ones. Does it get any cuter than that?

While they didn’t look particularly excited in the photos, having a little lady around is going to be so much fun! Their parents are over the moon. 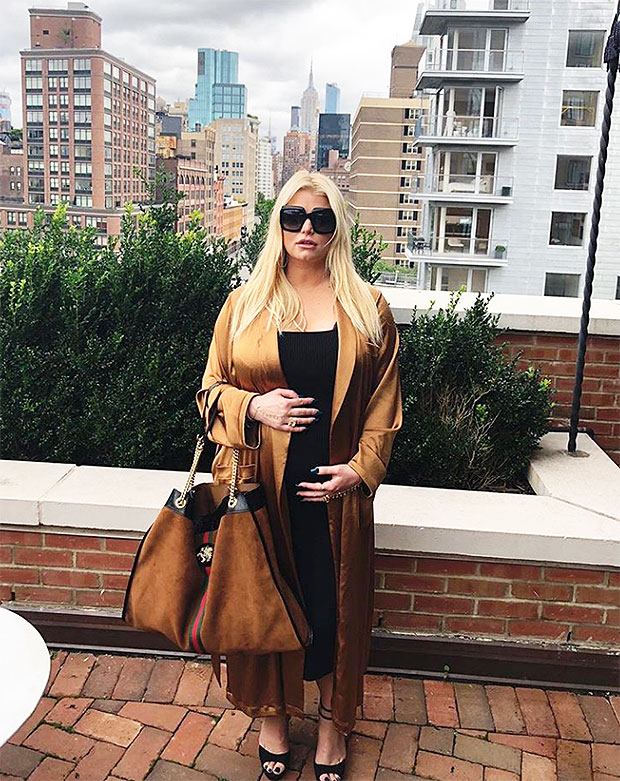 “Jessica is absolutely thrilled to be expecting another baby, because she sees it a a real blessing from God,” a source close to the couple told Hollywoodlife.com EXCLUSIVELY. “[Eric] didn’t need any persuading to start trying for another kid. Being a dad to Ace and Maxwell is the best thing in the world as far as he’s concerned, so he was more than happy to add another to the mix.”

TBH, we’re so happy to see Jessica pregnant again because we never thought baby number three would happen. She said so herself in May 2017 on Ellen DeGeneres‘ show. Who could forget?

“We got an IUD, nothing is going to get into that uterus,” Jessica said. “I have two beautiful children and I’m not having a third. They’re too cute! You can’t top that.” But now she has — and we know this baby girl is going to be so adorable, Jessica will be eating her words.