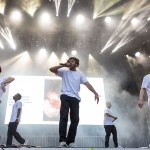 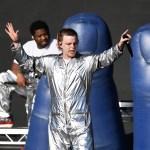 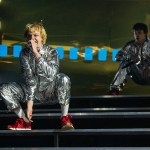 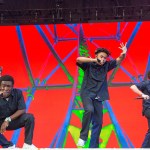 Brockhampton’s new album has finally arrived. The band dropped ‘Iridescence’ on Sept. 21, which includes their hit ‘Tonya’ and so much more. Listen and obsess over their latest creation now!

Brockhampton has given us all what we’ve been waiting for — new music! The group unveiled their 15-track new album, Irisdescence, to the world on Sept. 21, and it is pure fire. The album includes the previously released singles, “Tonya” and “J’ouvert.” As if things couldn’t get any better, Brockhampton also dropped the music video for “J’ouvert.” Bless you, Brockhampton.

The band is set to start their North American tour very soon. Their first North American date is Oct. 3 in Mesa, Arizona. They’ll be headed everywhere from Missouri to Texas to New York to Massachusetts. You can check out all the dates on their official website. Their last date is Dec. 6 in Las Vegas, Nevada.

Brockhampton announced their fourth studio album, Team Effort, in Dec. 2017. The album was delayed, and band member Kevin Abstract tweeted on Aug. 28: “Not tryna lead anyone on or anything i just want us to keep making stuff we’re proud of and put it out when we’re ready i mean it from the bottom of my heart when i say thank you for your patience. iridescence.” He also tweeted: “Brand new music brand new feelings iridescence.” The wait for the album was long, but it was totally worth it!

Group member Ameer Vann was also kicked out of the band in May 2018 over sexual misconduct allegations. The band cancelled their remaining tour dates and their appearance at the Governors Ball Music Festival. Brockhampton, minus Ameer, performed on The Tonight Show with Jimmy Fallon in June 2018. It was their late night television debut. They promised us new music, and they totally delivered. Now let’s get back to listening to Iridescence!