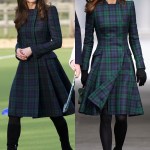 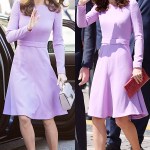 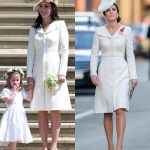 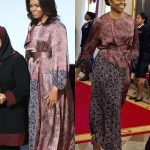 Most of us ‘normal people’ are used to re-wearing our clothes on multiple occasions, but only a few celebs are known for ‘recycling’ their looks. See pics of double wearers below!

Kate Middleton is the most famous recycler of all — she’s even got the nickname “Royal Recycler!” She has impeccable taste and has to make a LOT of appearances, so it makes sense that she shops her own closet every once in a while. Kate has re-worn outfits countless times, but one of the most famous occasions of her recycling an outfit was the white Alexander McQueen coat dress she wore to Prince Harry and Meghan Markle‘s Royal Wedding in May 2018. She had worn the outfit twice before, and it was a great way to make sure Meghan was the center of attention on her big day.

Is there something with McQueen? Tiffany Haddish wore a white Alexander McQueen dress, which she bought herself (and cost $4,000!) for the premiere of Girls Trip in July 2017, and wore it again while hosting SNL in November 2017. “I feel like I should be able to wear what I want, when I want, however many times I want, as long as I Febreze it,” she joked. She wore the dress again while hosting the MTV Movie & TV Awards in Los Angeles in June 2018. Get your money’s worth, girl! Padma Lakshmi just stunned in a red J. Mendel dress at the 2018 Emmys. She actually first wore that dress at a Vogue event in India in 2017.

Michelle Obama was respected for wearing affordable fashion like J. Crew when her husband Barack Obama was in office. She also re-wore a dress – a belted floral number by Dries Van Noten — for a summit in Qatar in November 2015 and then again in the White House in 2016. See more pics in the gallery attached above!