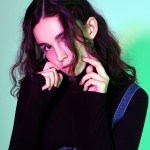 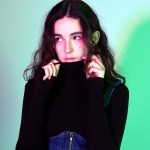 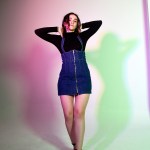 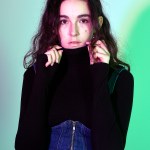 Robinson’s upbeat electronic pop anthem ‘Nothing To Regret,’ has over 50 million streams online, and went gold in her home of New Zealand. Now, she’s seeking global stardom with ‘Medicine,’ & we have a first look at the video!

Somewhere between the melodic ballads of Lorde, and the edgy synth pop music of Charli XCX, you’ll find Robinson, 22, the New Zealand newcomer penning danceable tracks the internet can’t stop listening to. HollywoodLife has your first look at the singer’s brand new video for “Medicine,” below, and even sat down with the singer to get all the details!

What marks your earliest memories of music?

Robinson: I think for me, my mom’s side of the family was always really musical, and so, my grandmother would play the piano and sing. I’d come around, and she’d have these big gatherings with all the family, and she’d be playing and everyone would be singing. So – I think subconsciously it was really immersed into my childhood, and there was never kind of a point where I was like ‘oh, I love music,’ or ‘I want to do music,’ it was just always there if that makes sense. Growing up, with that kind of influence of my family being so musical, for me, it was kind of inevitable that I would feel so drawn towards music. I was one of those kids that was always singing.

Where do you draw your musical influences from?

Robinson: Even growing up with really strong lyricists like Jeff Buckly, and Stevie Nicks, I think you know, I’ve got a really wide taste for a lot of music, but there’s definitely those that I look to see how they tell a story, and what they’re kind of conveying, so I think growing up, I was moved by those types of artists. They inspired me to write music that resonates with me, and is honest as I can be with myself, but also that resonates with other people too.

Do you think your New Zealand roots influenced your sound at all?

Robinson: New Zealand is obviously very far away from the rest of the world, and I grew up in a really small town, in the south island, and so tiny, and me and my friends would just hangout, and be in nature a lot of the time, and kind of make our own fun, so I think that’s probably influenced my music in some way, probably subconsciously, without really knowing it.

Tell me about the story behind your latest single, “Medicine.”

Robinson: For me, I always really loved the term “tasting my own medicine,” and I sometimes you just notice things around you, and I’m sure I’ve done it before, and everyone has kind of gone through it, but you might say something or do something that may affect another person, and sometimes you don’t realize how your actions affect other people, and obviously the song does sound like it’s about a romantic situation, but I think it can also apply to the kind of nature of not really knowing the weight of your actions until they’re done to us, and it’s like oh, so that’s how that feels…and that actually can hurt somebody. So I think it’s more about having an awareness of other people’s feelings.

Tell me about creating the video for the track.

Robinson: For the “Medicine” music video, I was like I love [my director] Morgan so much, and we work together so well, that I just really wanted to have her on board, because I think creatively, we work really well together. She just kind of sees what I’m seeing in terms of the vision for the music video. I think the song is quite heavy, and I think it was important for me to show some kind of visual story throughout it, rather than a performance video. So, this music video follows a storyline, and we shot it in Malibu – which was amazing. It’s a very sort of dramatic video, I suppose, but it comes back to real life with a lot of symbolism. I was in the ocean, in this red dress, and the red dress symbolized the weight of my actions, and the realization of those actions. It kind of deals with being true to your friend, but also not being able to help how you feel sometimes….I’m a fairytale romantic. So, I’m just like, I love love! It just really showcased the meaning of the song to me, which was obviously, sometimes, we can’t help our feelings, but we have to be careful not to hurt other people.

The internet went crazy for your song “Nothing To Regret.”  What do you think it is about the song people connected to so well?

Robinson: Probably just the carefree nature of it, and it obviously does sound like a really upbeat song, but the lyrics definitely go back to that sort of melancholy feel of kind of just going throughout the whole week and kind of just waiting for the weekend, and it’s in sight, but you still have to push through that Monday to Friday routine, and obviously the weekend is a time where you can just have fun, you can be with your friends, and kind of hopefully can be all on the same schedule for once.

Be sure to keep an eye out – towards the end of the year Robinson is planning a series of European tour dates! In the meantime, catch her brand new video for “Medicine,” above.