It’s been over two months since Cardi gave birth and fans STILL haven’t seen her little one’s face — but the rapper gave another glimpse on Sept. 19. What’d she show off this time?

We thought it was hard waiting for Cardi B, 25, to give birth to her first baby, but now two-month-old Kulture is here and we still haven’t seen her! How long is the new mom going to keep us in the dark? While Cardi has technically revealed little glimpses here and there on social media, she has only shared Kulture’s kicking feet, the side of her head, her little hands and lips — but never her face! And on Sept. 19, Cardi kept teasing her Instagram followers with another sweet shot. This time, it was of her infant’s arm in a striped long-sleeve. “Goodnight with my cuddle bud,” the rapper wrote at 5:40 in the morning.

“Don’t call me later this afternoon cause imma be KO,” she added hours later, posting sweet footage of her little one’s arm. Kulture could be heard cooing in the background while Cardi asked her to go back to sleep. So even though we haven’t seen her face, we have heard her voice! Cardi has given us so many bits and pieces that we could eventually build a pic of Kulture like a puzzle. What’s next, an eyeball? But if you’re wondering what the delay is all about, both of the baby’s parents are reportedly wary of sharing her.

“Cardi knows her fans are desperate to see Kulture and as much as she wants to give her fans what they want she has major fears over letting the world see her baby girl,” a source close to Cardi and her husband Offset told HollywoodLife EXCLUSIVELY. “Cardi is very superstitious and she worries that showing Kulture’s face will make her a target for bad energy from her haters.” 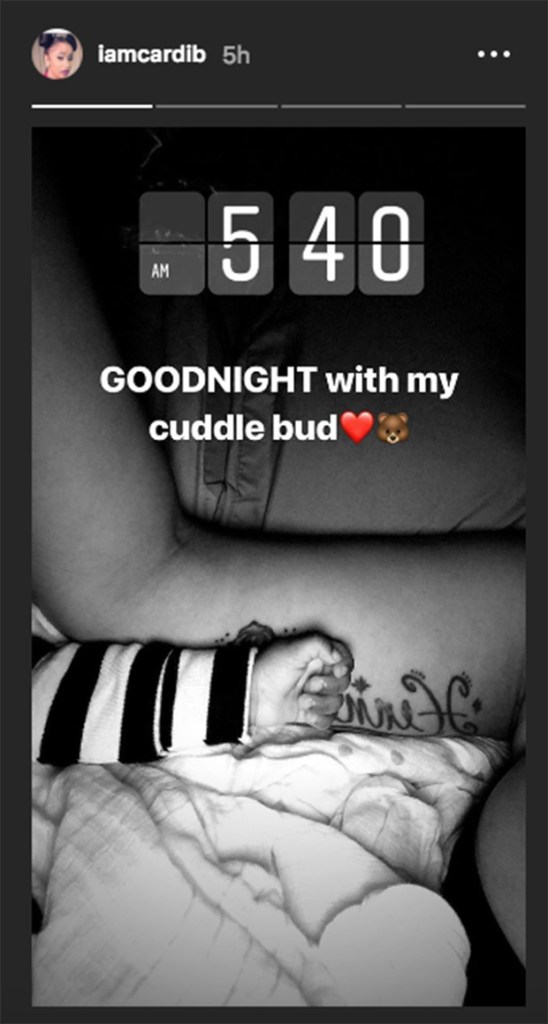 And she isn’t alone in that! “Offset is even more paranoid and protective than Cardi is,” the insider added. “He’s been saying they might keep Kulture’s identity hidden indefinitely, just to shield her from all the craziness and let her have a normal childhood.”

You know what that means? It sounds like it’ll be awhile before we get a real look at this little one.