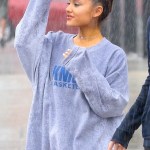 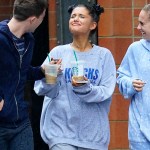 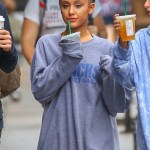 Ariana Grande is leaning on her friends and loved ones after her ex, Mac Miller’s, death, and she was photographed out with pals on Sept. 18. Unfortunately, they got stuck in the middle of a rainstorm during the outing! See the pic here.

It’s been a rough few weeks for Ariana Grande, as she’s been mourning the loss of Mac Miller, who she previously dated for almost two years. Although Ariana stayed out of the public eye for a week after Mac’s tragic passing, she finally returned to social media on Sept. 14, and new photos of her out and about surfaced four days later. In the pics, Ariana is seen enjoying a Starbucks drink while out with friends in New York City. She’s dressed comfortably, in gray pants and a matching oversized sweatshirt, and looks to be unbothered, despite the rain pouring down.

Earlier in the day, Ari was seen being consoled by her fiance, Pete Davidson, during another NYC outing. Luckily, she has her friends and her man to lean on during this difficult time. Although Ariana and Mac broke up earlier this year, and she wasted no time moving on with Pete, she obviously still considers him someone near and dear to her heart. “I adored you from the day I met you when I was nineteen and I always will,” Ariana admitted on Instagram, in a tribute to Mac. The rapper died of an apparent overdose, although his official cause of death has not been confirmed.

Ariana has been open in the past about having to move on from Mac because their relationship was “toxic,” and admitted that she had to end things with him because she couldn’t be his “babysitter” anymore. In her message after he passed, she apologized for not being able to help him when they were together. 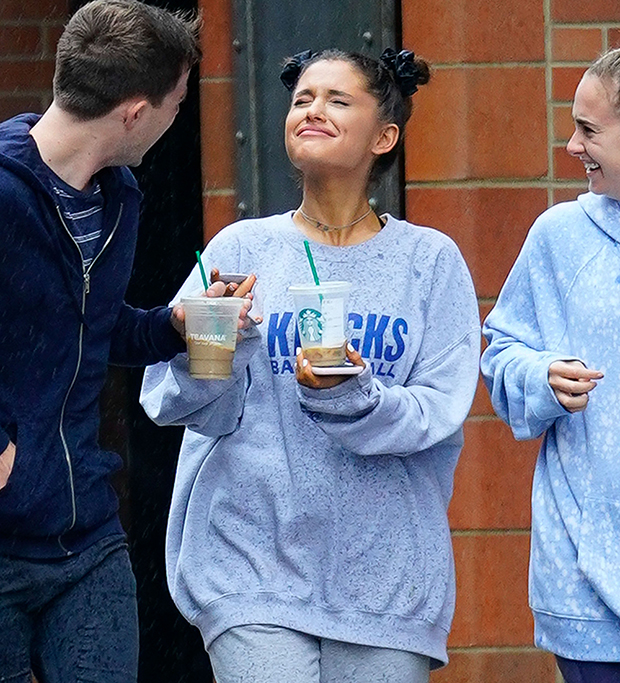 “I’m so sorry I couldn’t fix you or take your pain away,” Ari wrote. “I really wanted to. The kindest, sweetest soul with demons he never deserved.” Ariana’s rep confirmed on Sept. 17 that the singer would be taking a “much needed” break to heal during this difficult time. “She will be staying close to home and using this period to spend time with her loved ones and work on new music without deadline,” the rep explained. “She thanks her fans for their understanding.”