Viva Italia! Anwar Hadid and his sister, Gigi Hadid, touched down in Milan for Fashion Week. Kendall Jenner, Anwar’s rumored bae, is also there – will the two get together for a hot time in Italy?

Fashion Weeks are so romantic – just ask Anwar Hadid 19, and Kendall Jenner, 22. The two rumored sweethearts were spotted out together in the Big Apple during New York Fashion Week, so fans will be looking for another reunion during Milan Fashion Week. Anwar accompanied his sister, Gigi Hadid, 23, when they arrived in Milan on Sept. 19. Both looked a little bleary-eyed and tired, probably from the 13-hour flight. After a little espresso and a nap, the two should be good as new.

After all, Anwar will need his energy if he and Kendall decide to stay out late at a Milan Fashion Week after party. Kendall let all her fans – and potential love interests – that she was headed to Italy on Instagram. She posted a slideshow of pictures, two of which were some sleepy-looking selfies. The third was a shot looking out the plane window. “Luka said hot mess,” she captioned the shot, probably referencing her model friend (and Kourtney Kardashian’s rumored new boyfriend) Luka Sabbat, 20. Oh, if only that’s what a “hot mess” looks like, because Kendall was beautiful.

Kendall – who said she’s been “super selective about what shows I would do” – didn’t walk at New York Fashion Week. She returned to the catwalk during London Fashion week, walked in the Burberry show. Perhaps she wanted to lay low following the “nude photo leak” scandal that happened right before NYFW. Someone posted, without permission, the nude photoshoot that Kendall did for Russell James’s upcoming book. Having her naked photos posted online left Kendall feeling “angry” and “violated,” a source close to the KUWTK star EXCLUSIVELY told HollywoodLife.com, because it took a lot of courage for her to pose naked. 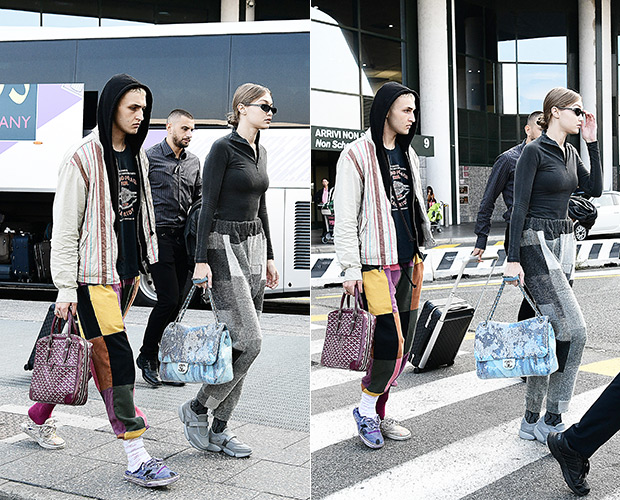 With her well-publicized “anxiety” issues, Kendall has pulled back on her modeling schedule. Thankfully, Anwar has been supportive of Kendall during these issues. He’s been “going above and beyond to try and help her,” a source EXCLUSIVELY told HollywoodLife.com, saying that during his scheduled appearances at New York Fashion Week, he made time to see Kendall. So, what are the odds that we’ll see these two “make time” for each other during Milan Fashion Week?