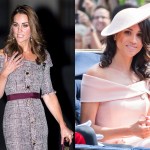 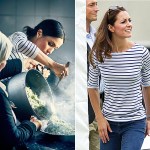 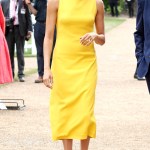 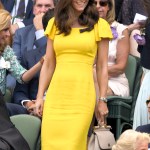 Royal twins! These Duchesses are rocking similar styles and we love that they are so close! Are they shopping in each other’s closets?

Meghan Markle, 37, showed her commitment to giving back by helping out at the Hubb Community Kitchen at the Al Manaar Muslim Cultural Heritage Centre in West London on multiple occasions throughout 2018. At once visit, she was wearing a classic white button down. On another, she was wearing a white and navy striped shirt. Has she been raiding Kate Middleton‘s closet? Kate frequently wears stripes, and wore an almost exact shirt at the Jerudong Trophy polo match in Gloucestershire in June 2014. Her sweater was by ME+EM.

We love the classic style statement Meghan made, but we love her attitude of giving back even more. According to Kensington Palace, “The Duchess of Sussex is supporting a new charity cookbook, ‘Together: Our Community Cookbook’, which celebrates the power of cooking to bring communities together.” Meghan wrote the foreword for the cookbook! In her new role, she is able to give back and help so many people, which must be so fulfilling! 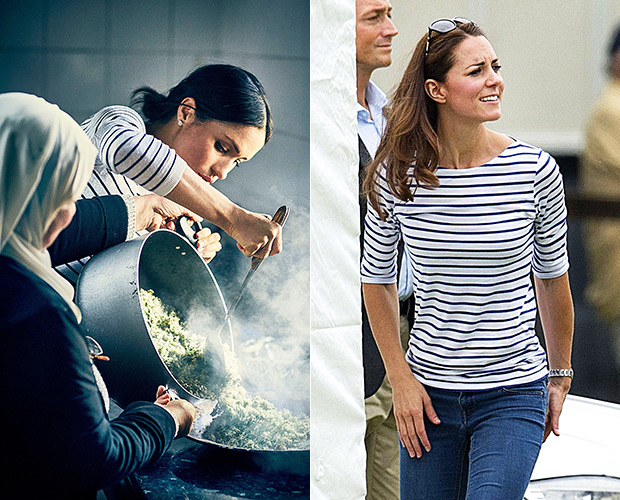 Kate is known as the “royal recycler” frequently re-wearing everything from designer dresses to jeans and heels. Kate even re-wore the cream Alexander McQueen outfit she wore at Meghan and Prince Harry’s wedding in May, which was one way to make sure she didn’t upstage the bride. As these “sisters” get closer and closer, we wonder if they are starting to share clothes! At the very least, their classic styles translate between each of them! A striped sweater is a timeless look, and it looks fabulous on both of them!