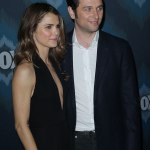 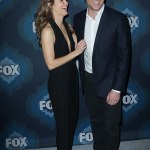 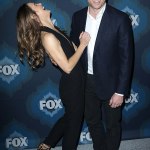 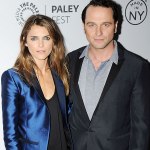 Matthew Rhys used his acceptance speech at the 2018 Emmy Awards to joke about proposing to girlfriend Keri Russell. Are they getting engaged?!

Congratulations are in order for Matthew Rhys! The 43-year-old actor won his first Emmy on Sept, 17,  for his role on The Americans, but it was his acceptance speech that really had people talking! After thanking the creators of his show, Rhys saved his last words for his costar and now girlfriend, Keri Russell. “She said if you propose to me, ‘I’ll punch you clean in the mouth.’ I don’t have the words. I don’t have the time. Neither of which would do you justice, except thank you,” Matthew said in his acceptance speech. OK, so no over-the-top proposal for Keri tonight!

The actor said that while he wouldn’t propose onstage, there is “more to come.” Wait – Is Matt insinuating he will be proposing to his lady sometime in the near future?! If marriage is in the cards for these two lovebirds, we wouldn’t be surprised. Matt and Keri looked incredibly cozy on the red carpet before the award show! The pair playfully joked about their relationship to ET.  “It keeps equilibrium in the relationship,” joked Matt, when talking about the fact they are both nominated. He then added that Keri suggested “that if one of us didn’t, we would [just break up.]” Well, it’s just the simplest way,” Matt remarked. These guys got jokes!

On the other hand, one lucky lady at the Emmy Awards really DID get proposed to! Film director Glenn Weiss brought the award show audience to their feet when he decided to pop the question to his girlfriend, Jan, during his acceptance speech! Glenn won the Emmy Award for the category Directing for a Variety Special for the Oscars and his speech got bittersweet when began talking about his mother who had recently passed. He then turned his attention to his girlfriend in the crowd before proclaiming, ” “The reason I don’t like to call you my girlfriend is because I want to make you my wife.” *Cue the happy tears*

But Keri Russell was robbed! RT @THR: #TheAmericans star Matthew Rhys takes time to thank Keri Russell in his #Emmys acceptance speech: "To the women who truly got me this award." pic.twitter.com/m067INSnba

We can only hope “more to come” means that these two will be tying the knot in the future. In the meantime, congrats to Matthew on an epic win!