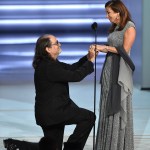 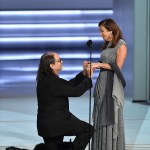 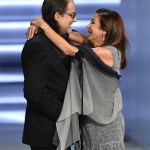 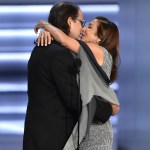 Glenn Weiss brought the audience to its feet when he decided to romantically propose to his girlfriend during his acceptance speech at the 2018 Primetime Emmy Awards on Sept. 17.

Aw! Director Glenn Weiss gave one of the most memorable speeches of the night when he shockingly proposed to his girlfriend, Jan, while giving his acceptance speech at the 2018 Primetime Emmy Awards on Sept. 17. Glenn won the Emmy Award for the category Directing for a Variety Special for the Oscars and his speech got bittersweet when he started talking about his inspiring mother who passed away just two weeks ago. He then thanked his girlfriend in the crowd, who he said his mother adored before romantically saying, “The reason I don’t like to call you my girlfriend is because I want to make you my wife.” The brunette beauty was just as shocked as the audience and shook her head yes before she eventually made her way to the stage, where Glenn presented her with his mom’s engagement ring. After he asked her to marry him and she said yes, they hugged in a sweet embrace as the Emmy crowd cheered.

The impressive proposal was definitely one of this year’s stand-out moments at the Emmys. With a night full of amazing first-time wins for some of Hollywood’s favorites in entertainment, it would have been hard to become a top highlight but we’d say Glenn takes the cake! There’s nothing quite like true love at an awards show and we’re so glad it happened at this one!

Glenn is known for directing some of TV’s biggest awards shows, including 16 Tony Awards, 3 Academy Awards, and the Billboard Awards. He has won numerous awards for his outstanding work including several other Emmy Awards and six Directors Guild of America Awards.

Despite the many achievements Glenn’s accomplished, we can bet tonight was his favorite! We’re so glad she said yes! Congratulations to the happy couple!