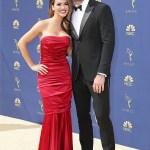 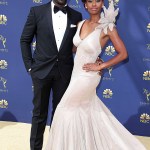 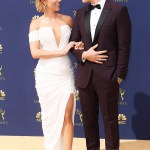 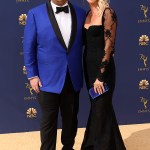 So many perfect pairs! These couples killed it on the Emmy Awards red carpet this year by bringing the best accessory of all — their S.O. Who looked the cutest?

Love was in the air at the Emmy Awards! Cute couples were hitting the red carpet on Sept. 17 one after another, looking so in love — and so fashionable — and we rounded them all up in the gallery above. One of the first pairs to walk the carpet together was The Handmaid’s Tale star Joseph Fiennes and his wife Maria. They looked so dapper and really set the bar high for the rest of the couples — as far as fashion and PDA. Joseph sported a sleek black suit while Maria stunned in a black dress with a gorgeous gold lace overlay.

Scarlett Johansson and Colin Jost weren’t far behind. The actress wore a strapless white dress with a plunging neckline and a high slit. With silver heels and matching earrings, her look was simply classy. Colin didn’t look too bad himself in a maroon suit. As for Hannah Zeile and Logan Shroyer, the This Is Us stars melted our hearts when they showed up together and posed together. Cute new couple alert? She wore a pale pink dress with tulle skirt, while he rocked a black suit and bow tie.

And with Sophie Turner‘s show Game of Thrones up for 22 awards, including Best Drama Series, we knew she was bound to show up with her soon-to-be hubby Joe Jonas — or at least that’s what we were hoping would happen! Although they’ve been together since 2016 and got engaged ten months ago, this would mark their red carpet debut, but they didn’t show.

Take a look at the gallery above to see all of the couples who did take on the Emmy Awards together. This is just the start to their awesome night!