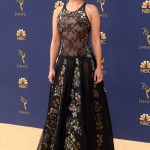 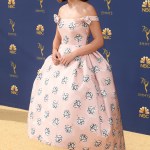 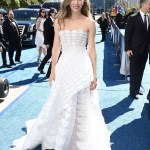 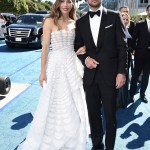 Dakota Fanning kicked off the Emmys red carpet excitement with a breathtaking, green gown! ‘The Alienist’ actress stunned in the belted number and we have her full look here!

Dakota Fanning, 24, turned heads in a beautiful green gown on the red carpet at the 70th Primetime Emmy Awards on September 17! The Alienist actress couldn’t have picked a better look, as her dress was belted at the waist and featured delicate pleats. Her red carpet number also featured a bit of a plunging neckline with thin straps.

Fanning had everyone talking at the Microsoft Theater in Los Angeles, CA, when stepped out on the red carpet solo. She was glowing with minimal makeup and her blonde hair half-up. Fanning even accessorized with green diamonds to match her gown. — See her full look below!

The last time Fanning was at the Emmys, she was 8-years-old. And, although it’s been a hot minute since she attended the annual awards show, she admitted on the red carpet that she remembers every minute of her first-ever Emmys. This time around, Fanning’s latest project, TNT’sThe Alienist is nominated for Best Limited Series. Many fans were surprised by the nod, seeing as the last time TNT was even in the running for Best Limited Series was in 2006 for Into the West. Not tot mention, the last time a TNT show scored a victory in this particular category was 23 years ago in 1995 for and the only time it prevailed in this category was 23 years ago for Joseph. 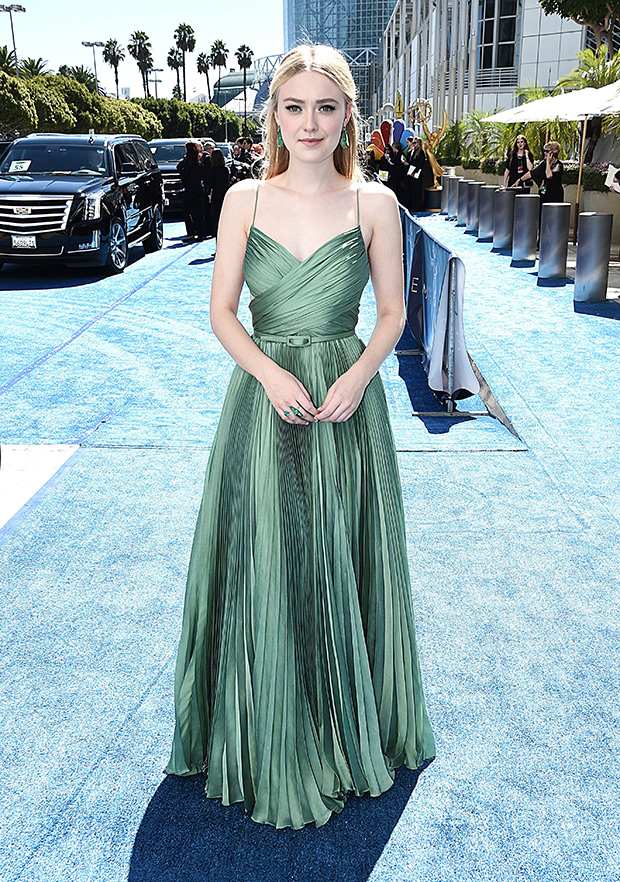 Dakota Fanning arrives to the 70th Annual Primetime Emmys at the Microsoft Theater in Los Angeles, California on September 17, 2018.

The 70th Annual Primetime Emmy Awards — which will be hosted by Saturday Night Live’s Weekend Update duo Michael Che and Colin Jost — will see the likes of Hollywood’s most prominent stars in film and television.

For the first time in 18 years, Netflix beat HBO to earn the most nods, with 112 nominations, as opposed to HBO’s 108. Game of Thrones and Westworld were the most-nominated dramas, with 22 and 21 nominations, respectively. Saturday Night Live also is up for 21 awards, followed by The Handmaid’s Tale with 20, Atlanta with 16 and The Marvelous Mrs. Maisel with 14. The Crown, This Is Us and Stranger Things are all in the running for Emmys this year as well.

Meanwhile, Sandra Oh made history in July as the first woman of Asian descent to earn an Emmy nomination for lead actress in a drama series for her work on Killing Eve.