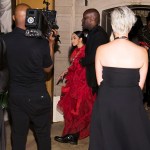 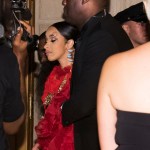 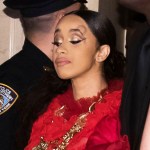 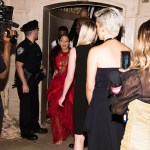 Cardi B looks hotter than ever and completely carefree in her first photo since her NYFW brawl with Nicki Minaj! The rapper showed off her amazing curves in a snap with her daughter, Kulture, while visiting Offset! See it here!

It looks like the bump on Cardi B‘s head healed pretty nicely. The rapper, 25, was photographed for the first time since her NYFW brawl with Nicki Minaj, 35, which occurred just one week ago. Cardi showed off her amazing post-baby body in a full-length photo on her Instagram, September 16. She looked over her shoulder in the photo, as she popped her booty out in a bright yellow jumpsuit. Cardi donned long blonde hair and nude pointed stilettos. Unfortunately, baby Kulture — whose face has yet to be exposed by her parents — was covered and hidden inside her carriage.

The new mom visited her husband, Offset, 26, along with her daughter, Kulture, while the Migos rapper was hard at work. “We came to see Poppa Bear,” Cardi captioned the photo, where she is seen pushing baby Kulture in her pink designer baby stroller with gold trimming. Migos is currently on tour with Drake, 31, so it looks like Cardi hit up one of their tour stops backstage for some family time. — See the photo below!

Nicki and Cardi’s ongoing beef hit its peak at the Harper’s Bazaar’s ICONS Party the Plaza Hotel during New York Fashion Week on September 7. The annual party took a dangerous turn when guests heard yelling from a different floor of the venue, right in time for Christina Aguilera‘s performance. Reports and videos of the fight have since gone viral, with different accounts of what exactly went down. 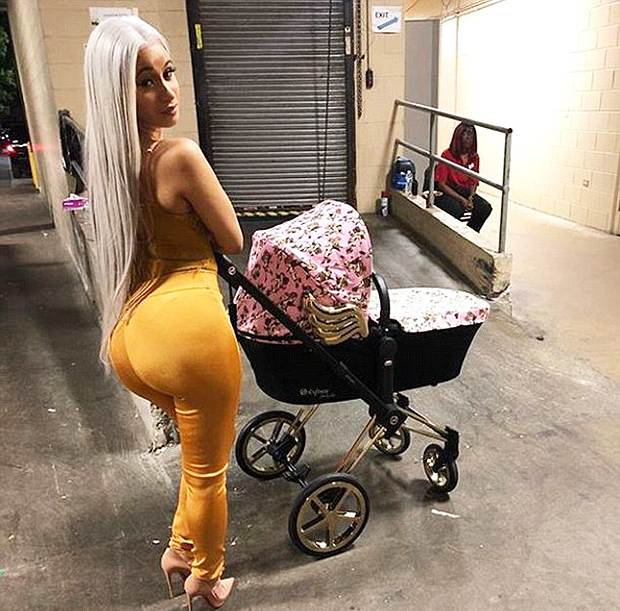 Cardi B takes baby Kulture to see Offset (on September 16, 2018) in her first photo since her NYFW brawl with Nicki Minaj.

As seen in videos from the party, Cardi took off her red stiletto and threw it in Nicki’s direction, presumably aiming at the rapper. Cardi can also be heard yelling in Minaj’s direction, claiming the “Barbie Dreams” rapper had mentioned her daughter, Kulture. Cardi later claimed Minaj spoke about her parenting skills. In other videos, you can hear Cardi yell, “B–ch come here!” multiple times. Cardi can also be heard defending her daughter, Kulture, in the videos, as she alleged Nicki brought up the baby during their fight.

Nicki reportedly remained calm throughout the altercation, which left Cardi with a quarter-sized lump above her left eyebrow. She exited the party, after allegedly being escorted out by police, with no earrings and only one shoe on.

Cardi later took to Instagram to claim that she’s kept her mouth shut amidst numerous alleged incidents, where she says Nicki has attempted to ruin her success, among other things. Nicki later addressed the incident on Queen Radio.

“The other night, I was a part of something so mortifying and so humiliating to go through,” Minaj said. “The way they passed by looking at this disgusting commotion, I will never forget. I was mortified.”

Minaj later called out Cardi for her recent behavior, claiming someone needs to get her help. “You’re angry and you’re sad. This is not funny and this is not about attacking. This is about get this woman some f–king help. This woman is at the best stage in her career and she’s out here throwing bottles and throwing shoes? Who the f–k is going to give her a f–king intervention?”