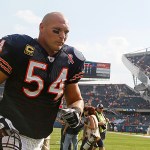 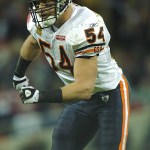 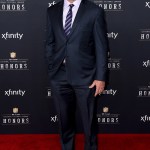 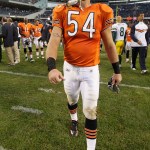 The NFL season is underway – so who does ex-Chicago Bears star Brian Urlacher think will win Super Bowl 53? He’s not telling, and Brian EXCLUSIVELY reveals to us why he’s keeping his pick under wraps!

Week 2 of the 2018 NFL Season ends on Sept. 17 with Monday Night Football. The Seattle Seahawks face the Chicago Bears, each team hungry for their first win. Even though it’s early in the season, some armchair quarterbacks have already picked a  Super Bowl 53 champion. However, a man who’s actually played the game – retired Bears linebacker Brian Urlacher, 40 — might be a stronger authority on the subject. The 2000 Defensive Rookie of the Year, 8x Pro Bowl pick and recent inductee into the Pro Football Hall Of Fame knows a thing or two about the game. Yet, he’s keeping his pick to himself – for a good reason!  “Usually when I pick a team this early in the season, their quarterback gets hurt,” Brian EXCLUSIVELY told HollywoodLife.com at an event celebrating FanDuel’s “Gridiron Pick’Em” fantasy football competition. “So, I will try to avoid that, instead of picking one team, like I have done on radio shows over the last few years.”

Well, that’s good news for Bears quarterback Mitchell Trubisky, 24, now in his sophomore NFL season. Still, Brian – who played all of his 13 seasons with “Da Bears” – feels tempted to put his support behind his old team. “It is extremely hard!” he tells HollywoodLife.com. “You know, I am obviously fond of most of the guys on the Bears, so I want to pick their players. I [also] want them to give me a reason to pick them.

“I think this year could be a lot of reasons to pick their players. I think this year, they are going to be a lot better on offense. I know defense — in fantasy [football] doesn’t do a lot —  but I think we will have some players that will do some stuff this year,” he added. One player who is tempting Brian to pick him during his fantasy football season is the Bears’ new acquisition, Khalil Mack. Right before the start of the 2018 season, the Oakland Raiders traded Mack to the Bears, along with a 2020 second-round pick and a conditional fifth-round pick for the Bears’ first-round draft picks in 2019 and 2020 (as well as a third-round pick in 2020 and a sixth-round pick in 2019.) The Bears also signed Khalil to a record-setting six-year, $141 million extension, making him the highest-paid defensive player in NFL history, according to ESPN.

Oakland’s loss is Chicago’s gains in Brian’s eyes. “Khalil Mack! Huge!” Brian said. “One of the top two or three players in the NFL in my opinion. Not just a defensive end —  if you look at players in the NFL, he is at the top of the list. It didn’t take much to get him. I was really surprised that the Raiders would trade him for that. But I am glad that they did. The Bears got him and paid him and made him happy. I know the Bears are happy as well.”

Will Khalil help the Bears pick up their first win of the season? They host the Seattle Seahawks for the Sep. 17 edition of Monday Night Football at 8:15 PM ET on ESPN.