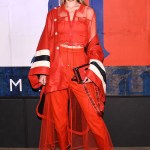 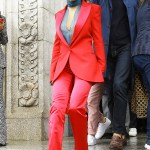 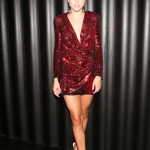 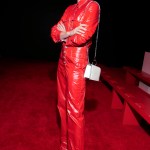 Call the New York fire department, because these celebs were smoking at 2018 NYFW! From a pair of jaguar pants to a Marc Jacobs gown, stars spiced up major trends in hot red.

If Nelly attended New York Fashion Week, he’d say one thing: Whew, it’s getting hot in here! The hottest event in every fashionista’s calendar called for a seriously spicy color: fire engine red. And boy, did embers fly! Nicki Minaj, 35, and Cardi B, 25, packed on the fabric in voluminous gowns. Appropriate, considering the major impact they had on this year’s NYFW. Cardi’s shades of red spilled and spilled in the multiple layers of her Dolce & Gabbana gown’s ruffles, fitting for the heat she faced with her rival Nicki at the Harper’s Bazaar ICONS Party on Sept. 7. Nicki followed up her rap opponent’s couture game by wearing a Marc Jacobs gown, also hot red and big on the magnitude, in the front-row of the designer’s show on Sept. 12. Nicki and Cardi weren’t the only ones to compete with their NYFW looks.

Sofia Richie, 20, wore a satin red pantsuit with a gauzy dotted under layer at the Carolina Herrera runway show on Sept. 10. But her choice in co-ord was a bit awkward, considering who showed up to the same event. Hailey Baldwin, 21, the fiancee of Sofia’s ex-boyfriend Justin Bieber, 24, wore an almost identical blazer and trousers set, but in a shade lighter. Thank goodness for the pink! While both models rocked their menswear with equal amounts of cool, we have to hand it to Sofia. Wearing a pantsuit is already a power move, and she was even more of a boss lady by stunting in the color wheel’s most outspoken shade, red. Lionel Richie’s daughter liked the color so much, she wore it to the Wilhelmina Models party in a sequin mini dress on Sept. 10.

Gigi Hadid, 23, also pulled a copycat move at NYFW…on her own self! The model committed the vogue sin by wearing the same item twice, but we’re happy Gigi rebelled. The model proved that rules are meant to be broken in a matte red Tommy Hilfiger jacket that she once wore on the runway in 2015, and reused again for the designer’s launch party for its collaboration with Formula One racing driver, Lewis Hamilton, on Sept. 10. Fun fact: This was the first Tommy Hilfiger piece the super model ever strut in on the designer’s runway.

That was just a quick recap of the shades of red we saw at this season’s NYFW. Check out our gallery above for even more fire looks!