Cuteness overload! The three youngest Kar-Jenners had an adorable play date and we’ve got the pic of Chicago West, True Thompson and Stormi Webster looking like triplets.

Three Kardashian-Jenner babies arrived in the first four months of 2018 and now all of the little ones are posing for the most adorable pic. Kim Kardashian shared the photo of the “triplets” on her Instagram on Sept. 14 and it’s amazing how much the little girls look alike. Kim’s daughter Chicago West is the eldest at nine-months-old and already looks so much like her stunning mother. “Chi” as Kim prefers to call her has big wide eyes and is wearing a black t-shirt while holding on to a pink My Little Pony stuffed animal.

On the right is Kylie Jenner‘s daughter Stormi Webster, who is just two weeks younger than Chi. The 21-year-old cosmetics mogul gave birth to her first child with boyfriend Travis Scott on Feb. 1 and the baby has Kylie’s big eyes, which is the trait that she hoped her daughter would inherit the most. She also mentioned how thrilled she was that Stormi got Travis’ pouty lips, joking that they didn’t come from her. Stormi could practically be Chi’s twin as they look so much alike and are so close in age, but resemble their famous moms enough to tell the difference.

Khloe Kardashian‘s daughter True Thompson is the youngest of the three amigos at five-months-old. She’s seated in a baby chair between her two cousins wearing an adorable red sundress. All three of the kiddos are looking up at the camera so Kim must have really been patient to be able to get three babies to sit completely still and pose for the pic. The moms have been sharing a bunch of pics of their babies having get togethers lately. On Sept. 12, Kylie shared a pic of Stormi and Chicago having a sleepover in matching pink onesies, while Kim shared a playdate pic with True and Chi on Sept. 8. 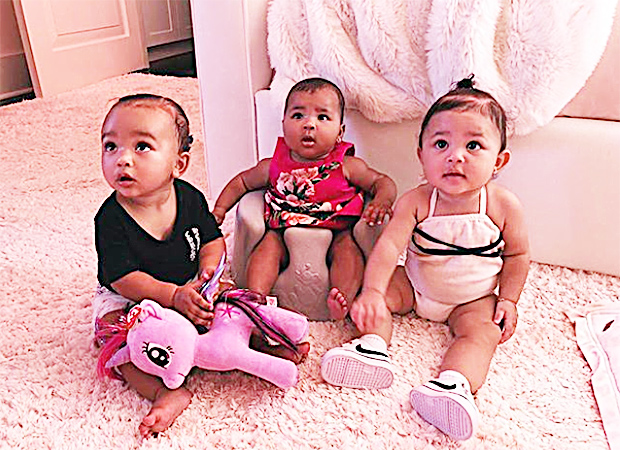 It’s going to be so much fun to watch the three Kar-Jenner “triplets” as they grow up. They’re so close in age that there’s no doubt the cousins are going to be best buddies for life. Since all three of their moms live in the same gated Hidden Hills community, they girls will spend tons of time together. And combined with Kim’s other children North, 5, and Saint, 3, as well as Kourtney Kardashian‘s three children, voila! The whole next generation of Keeping Up With The Kardashians is ready to go on for decades.