There it is! We’ve seen peeks of Carrie’s belly here and there, but her ‘Tonight Show’ appearance was the real deal. The mother of two showed off her bump and talked motherhood.

Carrie Underwood‘s Cry Pretty album came out today, but that’s not all fans are talking about. That’s because the country singer, 35, has more going on in her life at the moment than just amazing music. She’s also expecting her second baby with her husband and retired hockey player Mike Fisher, 38. So when she appeared on The Tonight Show With Jimmy Fallon on Sept. 13, all eyes were on her baby belly. Carrie showed up in an black outfit, rocking the monochrome look in her interview and performance. From her flowy top to her sexy pants (Seraphine’s Faux Leather Panel Maternity Leggings), she looked incredible — and sounded incredible, too!

The soon-to-be momma of two hasn’t flaunted her baby bump very much since announcing her pregnancy in August. Her latest music video for Love Wins was full of so many flowing outfits, huge belts and tight camera angles that fans would never have known she was expecting if she hadn’t shared the news on Instagram. The only glimpse she gave of her belly before the talk show was a dimly lit photo taken backstage at the Grand Ole Opry in August, so we’re so happy to finally see her looking pretty and pregnant. And to make the moment even better, she opened up about motherhood.

Carrie and Mike already have one son together, Isaiah, 3, and he wants to name his little sib after himself. How cute is that? “He’ll be really sweet and talk to my belly and kiss my belly,” she told Jimmy. “He’s the sweetest little boy. But no kid can really know that their life is going to change. He’ll have to share Mommy.” 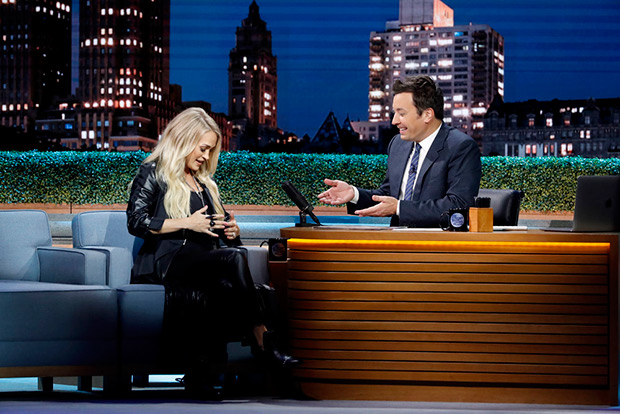 It’ll be a transition, but we bet Isaiah will grow to love having a little brother or sister. Fans think Carrie will be having a baby girl since she made her announcement in a pink jacket with pink balloons, and then wore that girly color to multiple events afterward, but she hasn’t made an official announcement yet.

She did explain away the Cry Pretty promo events she recently cancelled in her Tonight Show interview. While many were worried that her absences were pregnancy related, she actually was hospitalized for vertigo. “I don’t cancel shows. I will drag myself on the stage,” she said. “Basically, I got this viral thing. I woke up — I had vertigo. I could not stand up. It was crazy. I ended up in a German hospital for three days.” So happy to hear that both she and her baby are A-OK.