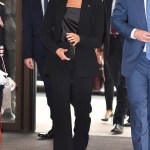 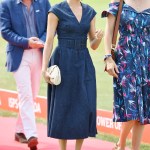 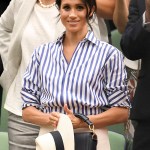 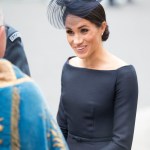 Meghan Markle, she’s just like the rest of us! See the viral photo that allegedly shows her scooping up dog poop outside Kensington Palace.

Meghan Markle, 37, is the ultimate dog mom! The Duchess and wife to Prince Harry, 33, was allegedly seen outside of the royal palace with a sweet pup, preparing to pick up his waste. Fans went crazy over a Tweet from reporter Lisa Petrillo, which appeared to picture Meghan. But – don’t be fooled, it turns out the woman was just Meghan’s complete doppelganger! The palace was able to confirm to Daily Mail that the woman pictured was not Meghan.

Nevertheless – the photo in question caused QUITE the controversy on the internet. Dozens of Twitter users took to the comments below Lisa’s post to share their thoughts. Some were completely convinced that the lady was indeed Meghan! “STOP!!! I am insanely jealous,” one person said. “That’s her no matter what is said,” another remarked. Yet, many were quick to shoot down the reporter’s claim that she had spotted Meghan. “That wasn’t HRH Meghan. The dog isn’t even a beagle or a black retriever, which are the two types of dogs she owns,” one person wrote. “That’s not Meghan or her dog. Good grief,” another comment said. We cant blame Lisa’s mistake though, these two ladies do look like literal twins!

While the poop-scooping woman may not have been Meghan, the Duchess is known for her love of dogs! The member of the royal family owns a few canine friends herself. Meghan previously rescued two dogs: a beagle named Guy who followed her to London from Canada, and Bogart, a Labrador-shepherd mix. Back when her Instagram page was still in service, Meghan was even known to share some adorable snaps of her pooches. Now, one of Meghan’s four-legged friends is even getting his own book! On Nov. 20, His Royal Dogness, Guy the Beagle: The Rebarkable True Story of Meghan Markle’s Rescue Dog,  will be released, which tells the story of the pup’s journey from the woods of Kentucky, to Kensington Palace. Too cute!

That wasn’t HRH Meghan. The dog isn’t even a beagle or a black retriever, which are the two types of dogs she owns. 🤦🏼‍♀️

Okay, so Meghan may not be scooping poop outside the palace these days, but she still manages to keep it real! Whoever this anonymous dog owner is, she must be having one interesting day after seeing her photo plastered all over the internet.