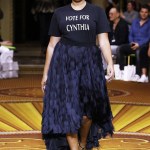 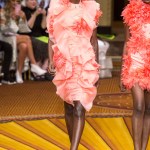 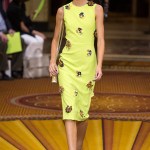 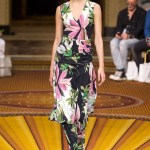 If Cynthia Nixon beats the odds and triumphs over Andrew Cuomo as the Democratic candidate for New York Governor, there will be one issue she won’t face – putting together a great wardrobe.

Watch out, Andrew Cuomo! If there’s one thing you’ll never beat gubernatorial challenger, Cynthia Nixon, on- it’s style. The former Sex & The City star and social activist-turned-politician was sitting front row at Christian Siriano’s dazzling show during New York Fashion Week. And it was clear that the über-talented designer had been inspired by her leadership and energy, as well as the power of all of today’s modern aspiring and on-the-go women.

Siriano, will be at his poll station for sure, Sept. 13, and we know exactly who he’ll be voting for. He sent one of his confident models out onto the runway in a ‘Vote For CYNTHIA’ T-shirt and long, sexy fringed skirt. And he, himself, closed the show wearing the identical T-shirt. No doubt, he’d love to dress ‘Governor’ Cynthia Nixon, because he truly adores making strong women of all shapes, sizes and ethnicities look gorgeous. When other designers didn’t step up to dress stars like, SNL’s Leslie Jones, The View’s Whoopi Goldberg, and The Greatest Showman’s Keala Settle, Siriano was thrilled to do it. And, his runway shows always feature models who have a diverse range of body sizes and backgrounds!

His front row for the new collection, reflected that exciting diversity as well, with Cynthia Nixon flanked by Sarah Hyland, OITNB’s Danielle Brooks, Carmen Electra, Whoopi Goldberg, Judith Light, and Tiffany Haddish. Meanwhile, on the runway were looks inspired by the “dream” Hawaiian-vacation that Christian himself never has time to take. As do neither of so many of the busy women he designs for. That Hawaiian-theme translated into tropical floral dresses, trousers, ruched-waist dresses over skinny pants, and woven bamboo print coat, dresses, vests, and trousers.

Palm green is a bright, happy theme throughout the collection for both day and evening looks. Cynthia Nixon, win or lose, should definitely pick up Siriano’s palm sleeveless sheath, embellished with floral paillettes, that she’ll be able to wear almost anywhere, in her life of activism. Siriano, also wants to unlock his client’s animal magnetism, by clothing them in one-sleeve cheetah mesh dresses, leopard print shirts, dramatic zebra dresses, leopard print skirts, python print blouses and trousers, and tiger-striped dresses.

For evening, Christian was all about drama. Eye-arresting color – palm green, Hawaiian blue, and flamingo pink. He understands that the powerful women who wear his designs, don’t want to be subtle when they enter a room. They want all eyes on them. That’s why Ashley Graham, rocked a drop dead, body-hugging, mermaid hem evening gown with a flowy, palm half train. And for every woman who wants to feel like a red carpet star, there’s was an absolute knockout – a palm green tiered tulle trailing skirt gown, with a sexy open-side bodice.

If Cynthia, makes it to the New York state governor’s mansion, there’s no doubt she’ll want to have a ball in that dress!