If you’ve ever checked out Mark’s Instagram, it seems like he’s always in the gym. He just revealed his daily routine and you’ll never believe what time he wakes up!

Now, THAT is a schedule! Mark Wahlberg, 47, basically has his day planned to the minute, and it obviously works for him, since he is in the best shape of his life! We works out in the gym for nearly three hours a day, plus plays golf for 30 minutes, which is another great arm workout. If he walks on a course, it’s cardio as well. Mark shared his daily schedule on Instagram, and his fans FLIPPED out at the intensely planned out day. We’re fascinated.

He also seems to be eating constantly! He has three meals a day plus four snacks — he definitely needs those calories if he is working out so much. He eats to fuel his body — turkey burgers and sweet potatoes for breakfast, a plate of grilled chicken, Kalamata olives, baby peppers, cherry tomatoes, cucumbers, and hard boiled eggs, and then chicken or fish for dinner, he revealed to Men’s Health. Tons of protein helps him build and repair his muscles. All that gym time won’t do much if you’re snacking on Oreos, unfortunately! See Mark’s ridiculously meticulous schedule in full below: 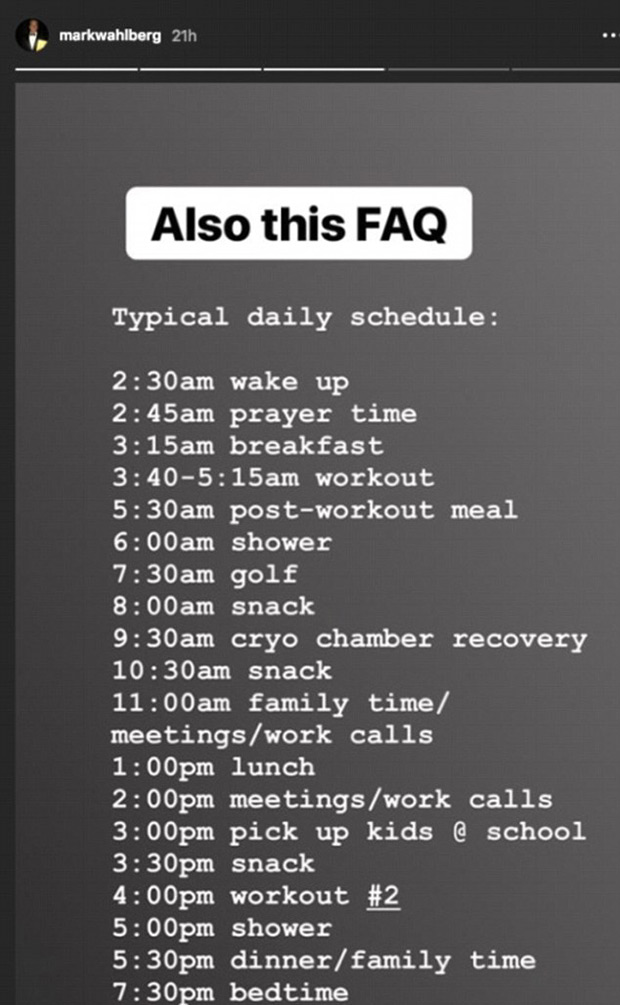 Mark also seriously prioritizes family time with his wife Rhea Durham, a model, and his four kids — two daughters, Ella Rae and Grace Margaret, and sons, Michael and Brendan Joseph. It’s so cute that he picks his kids up from school! Obviously, this schedule is when he is not filming a movie, but Mark has said in the past that he works hard for his family, so that when he does have down time, he can focus on them. So sweet!