It’s getting real! Season eight of ‘Teen Mom OG’ is less than a month away, and the cast members are all smiles in their first photo together. See for yourself!

Teen Mom OG will be returning on October 1st with two new cast members, Cheyenne Floyd, 25, and Bristol Palin, 27, but these addition didn’t feel real until now! That’s because all five of the lovely ladies got together for a group photo and shared it on social media. “Had a great night with these beautiful girls!” Amber Portwood, 28, wrote on Instagram. “Welcome New G’s to the the OG. Sending all my love.” Maci Bookout, 27, had an “awesome day working with these beauties,” and Catelynn Baltierra, 26, echoed that by saying it was nice meeting them. The cast members were photographed outside at night, and posed with their arms around each other and big smiles on their faces. Too cute!

So what can we expect from Bristol and Cheyenne this season? That’s what Teen Mom OG fans have been dying to know since the announcement that they’d be replacing Farrah Abraham on the show. Cheyenne has revealed that she’ll come clean about her baby with The Challenge: Rivals III cast-mate Cory Wharton, 27, which is guaranteed to be exciting. While fans of the Are You The One alum didn’t find out that she had a kid until Ryder was nine months old, she hadn’t clued Ryder’s dad in until just three months before that. Now they co-parent, and we can’t wait to watch their dynamic play out onscreen!

A sneak peek of Bristol’s footage was released in August and showed the mother of three with her mom Sarah Palin. “I was a teen mom,” she was saying. “My life is not perfect at all.” 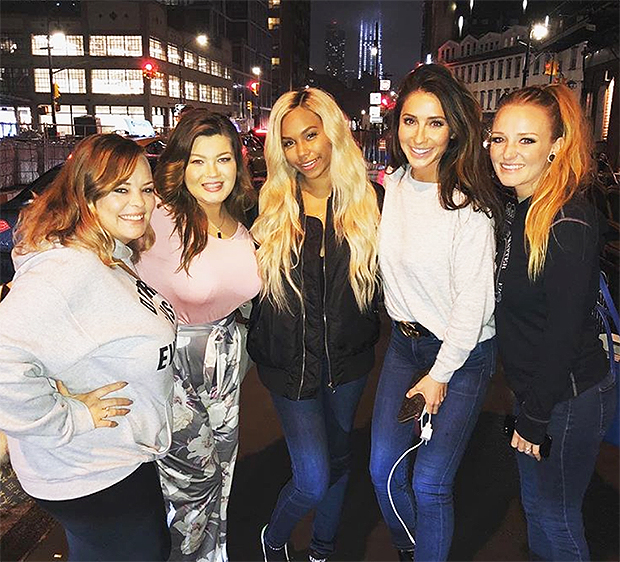 Had a great night with these beautiful girls! Welcome New G's to the the OG💋 sending all my love💖 @cheynotshy @bsmp2 @catelynnmtv @macideshanebookout

It’s been a decade since her teen pregnancy, but she’s still going to bring all the drama. She finalized her divorce from Dakota Meyer this summer, and they share two children together. Bristol will also be co-parenting on camera with her ex Levi Johnston.

And as if these two newbies aren’t going to be exciting enough, this group shot is the perfect reminder that we still get to watch Amber, Catelynn and Maci. October 1st can’t come soon enough!