We’ve seen celeb parents get shamed for LOTS of wild reasons, but this is a first. Shredded denim may be in style, but not for newborns apparently! Read the critical comments here.

When Ronnie Ortiz-Magro, 32, posted a pic of his five-month-old daughter Ariana Sky with a big ol’ smile on her face, we bet the Jersey Shore Family Vacation star was expecting compliments to flood his Instagram comments — not criticism. But that’s not what went down. Instead, his followers zeroed in on the baby’s outfit. Little Ariana was sporting a pink bow on her head that was as big as her face, plus a matching off-the-shoulder ruffly top. But it was her pants that had everyone in an outrage! They were acid washed and ripped, so her little knees were showing. While some simply thought the pants were ugly — “Get her some cute pants. Poor thing,” one person wrote — others claimed shredded jeans could be dangerous for the little one if the strings wrapped around her tiny toes.

But in addition to all of the dad-shaming was a slew of support. “I truly believe this outfit was to promote Jerzday,” one loyal fan wrote. “Calm down people.” He did reference the show in his caption, after all! “When you realize it’s #Jerzday! #FaceYouMakeWhenYouGetToWatchDaddyOnTv #HappyBaby #HappyJerzday.” Other fans thought the ripped jeans were super cute, and told him so! “She is amazingly beautiful! Cute little outfit! It’s unfortunate you have l all these hateful comments. She’s got better style than half these haters,” one person said. We hope he paid more attention to these comments, as opposed to all the negativity.

As long as he keeps a careful eye on the strings, what could go wrong? We’re sure Ariana’s little tootsies will be just fine. 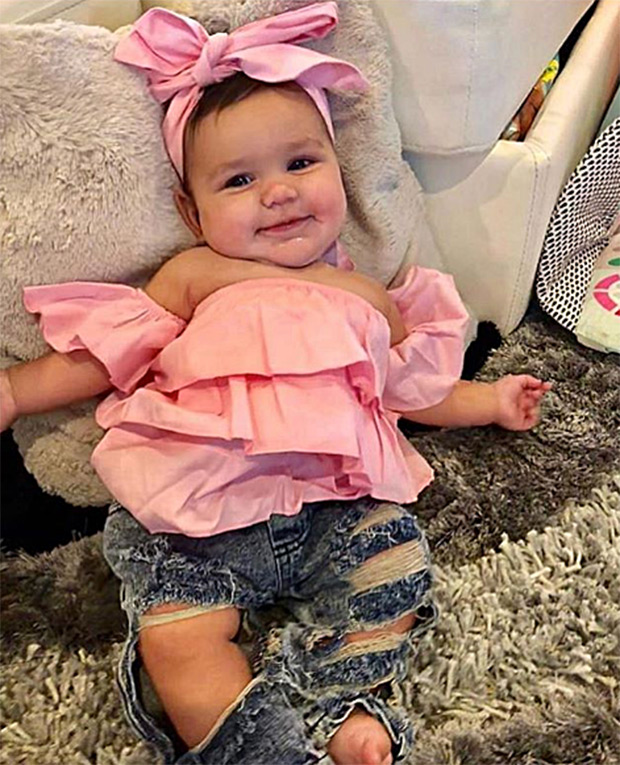 Last week on Jersey Shore Family Vacation, Ronnie was shown breaking down in tears because he was worrying about his daughter’s safety with her mother Jen Harley after they got in a fight. He even called the cops and asked for them to do a wellness check on Ariana. She was A-OK, but here’s to hoping the couple can keep the peace this time around for the sake of their little one.