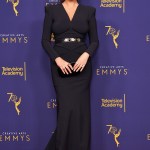 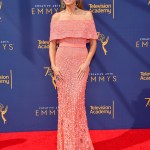 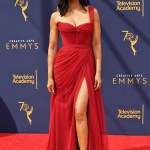 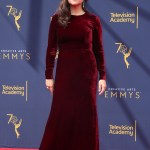 Chrissy Teigen absolutely stunned on the red carpet of the 2018 Creative Arts Emmys! Check out all of the best looks from the star-studded evening here!

The 2018 Creative Arts Emmys wasn’t just historic because of the three winners that walked away with the coveted EGOT distinction, it also featured some incredible outfits. For instance, fresh off her announcement that she’d be leaving Project Runway after 16 seasons, Heidi Klum was simply stunning in a coral Elie Saab dress. Meanwhile, Padma Lakshmi wore a sexy red Ester Abner dress with thigh high slit that was a perfect ensemble. On top of that, Tiffani Thiessen wore a velvet gown that was the definition of elegance.

One of the best outfits of the night was worn by the ever-hilarious Chrissy Teigen. The Lip Sync Battle co-host wore a fitted black dress with metallic belt as her hubby John Legend won an Emmy, making him one of the EGOT recipients of the night. In case you think EGOT is some acronym related to Game of Thrones, it simply means that John has won an Emmy, Golden Globe, Oscar and Tony. Congrats, John — it’s so well deserved!

Legend discussed with reporters after the show how much Chrissy inspires him and vice versa. “Well we inspire each other. She inspires my songs, she inspires me want to be a better husband and father,” Legend admitted. “And we support each other fully in everything we do. I root for her and her career and everything she is doing.”

We’ll keep you posted with all of the best fashion pictures as we had back into awards show season. In the meantime, check out all of the gorgeous arrivals on the red carpet of the 2018 Creative Arts Emmys in our gallery above.