Amanda Bynes is back! The actress returned to social media on September 9 with a glowing selfie! She wore her hair up with side bangs, and stunned with a dewy look! — See the photo here!

Amanda Bynes, 32, is looking good! The actress returned to Twitter after a 7-month hiatus, with a brand new selfie. Bynes angled the camera downward to capture her glowing highlight, long lashes, and dark nude lip on September 9, and she’s looking happy and healthy in the new photo. — See it below! Bynes, who has laid low as of recently, wore her hair in a slicked-back bun with her bangs pulled to the right side. Her dark roots were visible with her blonde highlights peeking through her bangs and top knot. The actress showed off her clear complexion in the selfie, which was snapped in a car. She even made it evident that she buckles up when on the road, as her seatbelt was a main feature in the snap.

Fans were thrilled to see how amazing Bynes looked in her selfie since she has been away from the spotlight. “This is a perfect pic to post. @amandabynes looks amazing. I’m SO happy for her. I would love to see her on the big screen soon. Amanda, you have some of the best comedic timing I’ve ever seen. Love you lots, and hope you’re as happy as you look,” one loyal fan wrote.

Her new photo came after she initially returned to Twitter on September 4, where she posted a photo with Hollywood producer, Neil Meron. Meron, 62, who Bynes called “incomparable,” produced Hairspray (2007), which she starred in alongside Zac Efron, 30, as well as Hairspray Live! (2016). 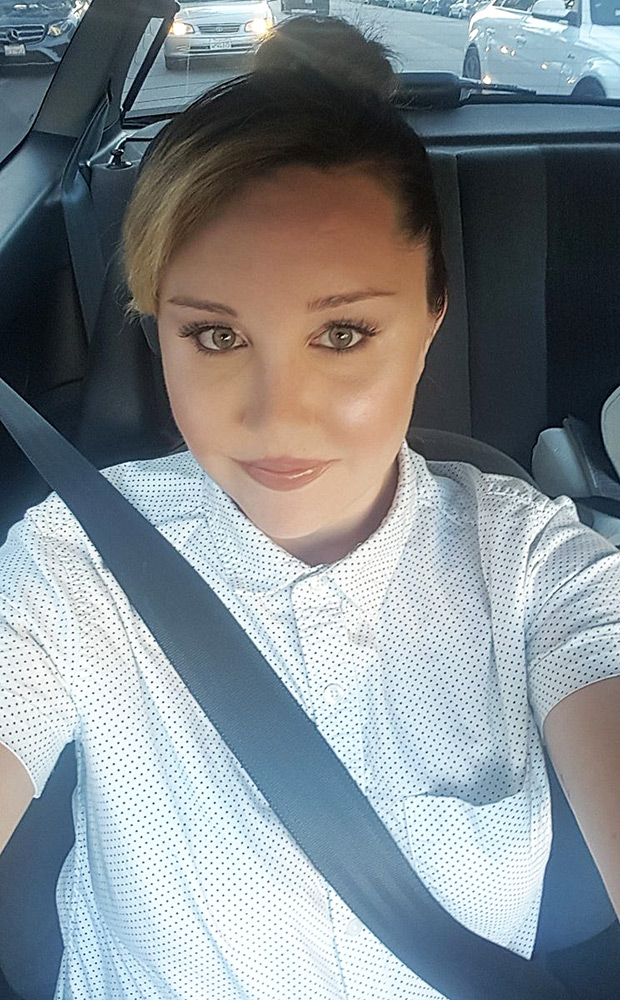 Amanda Bynes posts a selfie to Twitter on September 9, 2018.

As you may know, the actress has dealt with mental health issues in the past. Back in June 2017, Bynes admitted that she was “on drugs and trying to be hilarious,” following her questionable behavior leading up to the  interview. The interview, which was with Hollyscoop‘s Diana Madison, was her first time speaking out in four years, following her trouble in the spotlight.

Bynes posted her stunning selfie after she spoke out about the death of Mac Miller on Twitter, September 7. “I only got to know you a little bit, but you were such a sweet guy. Rest in Peace Mac,” she tweeted about the rapper, 26, who died of an apparent drug overdose that same day. She also shared a past Twitter exchange with the late rapper.