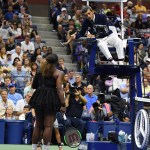 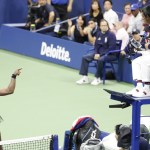 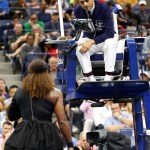 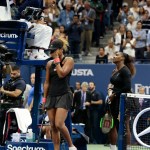 Tennis umpire Carlos Ramos is now in the public eye after getting into an argument with Serena Williams at the 2018 U.S. Open finals. Here’s everything you need to know about him!

Naomi Osaka‘s win over Serena Williams at the 2018 U.S. Open has been vastly overshadowed by the mid-court showdown between Serena and umpire Carlos Ramos who issued her a coaching violation, another violation for racket abuse and another violation for calling him a “thief” (after she argued he stole a point from her), which prompted him to award a game to Osaka. Following the controversial back-and-forth, here’s everything we know about the tennis umpire under scrutiny and in the spotlight.

1. He already has a reputation for taking a hard line on the rules. At the 2017 French Open, Ramos gave two warnings to Roger Federer for slow play and pressured him about coaching.

2. He has also been known for treating different plays differently for the same violation. Take the example of Novak Djokovic and Kei Nishikori. Both of these tennis stars throw down their racket in frustration during the quarter finals of Wimbledon. Only Novak received a warning.

3. Serena isn’t the only Williams accused of a coaching violation. Venus Williams was also targeted by Ramos for that, and like her sister, she too denied it, saying, “I’m 36 years old. I play fair.”

4. While Williams staunchly challenged Ramos’ coaching violation, Serena’s coach Patrick Mouratoglou did admit that he was coaching. However, he felt that Serena wasn’t watching him at the time. Serena also stated that she was only penalized because she was a woman. Before yesterday’s match, Ramos has never penalized a player in such an important match.