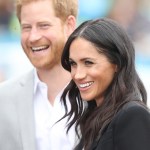 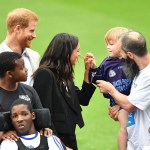 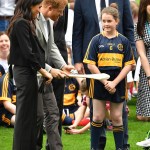 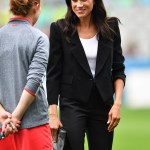 Meghan Markle recently sparked pregnancy rumors with her dress choice and now her mom, Doria Ragland, is causing the rumors to grow by taking nanny classes in Los Angeles. Is there a royal baby on the way?

Meghan Markle, 37, fueled pregnancy rumors when she recently stepped out in London with Prince Harry, 33, while wearing a loose fitting dress that could easily hide a baby bump, and now her mom, Doria Ragland, 62, is giving us more reason to believe the rumors could be true. Doria, who is reportedly planning on moving to the U.K. soon, was spotted taking regular baby-care classes near her house in Los Angeles, according to the Daily Star Sunday, and it has many royal family fans thinking she’s preparing for a grandchild. The classes, which she has reportedly been taking at the Cradle Company in Pasadena, have been teaching her vital skills, such as first aid, from local specialists and could definitely come in handy for a new baby in the family.

“Two of the teachers, Brandi and Hannah, are training Doria at her home half an hour away to avoid attracting unwanted attention,” a source told the outlet. “Meghan wants to avoid hiring staff if possible once her first child arrives. The thought of having her mum move in with them and take on the role of baby nurse is the best possible solution to that. Even more so because it’s something Doria has always wanted to do anyway. She already specializes in prenatal yoga. She’s learned everything from breastfeeding and lactation consultancy, basic baby care, CPR and first aid. The course also covers sleep training for later on, weaning and helping the new mother with her recovery.”

Meghan and Doria have always seemed to be really close and the new Duchess is reportedly having a difficult time being so far away from her mom, which is one of the reasons Doria is planning on moving and taking the classes. “Meghan and Doria are extremely close,” the source continued to tell the outlet. “While Doria likes her own life and freedom she also wants to be there for her daughter and future grandchild. With her new qualification and training to add to her role of grandmother, she will be ready to give her daughter some very hands-on help inside the Palace once the new Prince or Princess arrives.”

Despite Meghan’s dress and Doria’s actions, a source close to Meghan EXCLUSIVELY told HollywoodLife that the brunette baby is not pregnant just yet. “Meghan isn’t pregnant, and she and Harry really don’t pay much attention to all the rumors as they accept that it’s just part and parcel of being who they are, especially given their status as newlyweds,” the source explained. “Meghan knows that everything she wears right now is going to be analyzed for pregnancy ‘signs’ and ‘clues’ as is the way she styles her hair and the way she acts in public—she already has her every move scrutinized though so she’s starting to get used to that whole side of things. Meghan and Harry would really love to have a couple of children in total, a small, loving and close family would be the ideal scenario for them both, and they hope their dream will come true some day soon.”