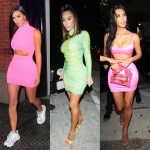 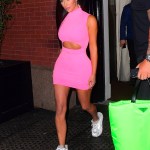 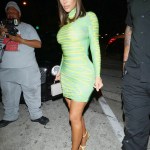 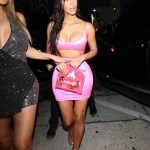 We’re positively green with envy after seeing how good Kim Kardashian looks in this neon bikini! See the sexy pic of Kim and her impossibly flat stomach here!

Does this woman ever take a bad photo? Kim Kardashian posted yet another smokin’ hot bikini pic on Instagram today, September 7, this time flaunting what she’s got in a neon green number. The two-piece was teensy tiny, showing off her washboard abs, little waist, and flawless legs to perfection in the photo captioned, “I’ll just leave this right here…” The high-cut bottoms also revealed her hips, basically proving there’s not an ounce of fat on her body. After whittling herself down to a mere 116 pounds, it’s clear from this pic that Kim’s done some serious work. Just look at how flat her stomach is!

She posted a second pic that shows the suit from a different angle. And guess what — it’s equally hot. Do you know how hard it is to keep everything taut and flat in that kneeling position? Girl’s got talent. Kim figured out this summer that her favorite color is neon green, clearly. Remember circa 2015 when all she wore was blush pink latex? We’re reliving that era, this time in lime. While out with Larsa Pippen in Miami in mid-August, she rented a green Lamborghini, and wore a long, green wig to match her car. Now that’s extra.

She wore a breathtakingly tight green midi dress to 2 Chainz and Kesha Ward‘s wedding just two days later! Have you ever even see lime green satin before? Thought so. She was also rocking the same space-age mirrored sunglasses as her bikini pic. Accessories on point! Honestly, there are too many Kim Kardashian neon green outfits to count right now, but we have some of the best ones rounded up HERE if you’re interested!

Kim, HollywoodLife learned EXCLUSIVELY has “never been prouder” of her body than she is right now, and it’s easy to see why. While she doesn’t want to lose any more weight, she previously said she’s determined to keep working out and getting more toned. Well, it seems that her gym days have totally paid off — she’s jacked!