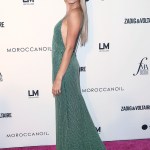 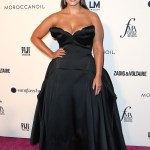 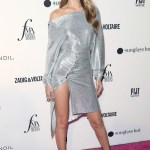 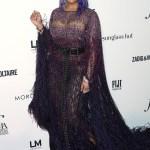 Watch EXCLUSIVE footage of Nicki Minaj’s wardrobe mishap at the Daily Front Row Awards on Sept. 6, which reportedly made her scream and left her butt (almost) hanging!

Nicki Minaj, 35, looked like a queen in Alexander McQueen at the Daily Front Row’s 6th Annual Fashion Media Awards on Sept. 6. But one fan’s foot reportedly disrupted her royal entrance at the Park Hyatt in New York! We captured EXCLUSIVE footage of Nicki awkwardly recruiting some help in covering up her ripped dress, and reportedly, exposed bum! A Twitter user also posted footage of when the incident allegedly went down — screams and all — which you can watch below. But the “Barbie Dreams” rapper didn’t excuse herself out of her presenter duties, and still took to the podium later…wardrobe malfunction in tow. An eyewitness in the audience EXCLUSIVELY told HollywoodLife that Nicki announced, “I am so sorry, my dress just ripped, my whole butt is out, but I need to introduce my girl, Winnie [Harlow].“
“She handled it like a pro and got emotional while introducing Winnie,” the eyewitness adds. Nicki brought the 24-year-old model onstage for the event’s Breakthrough Model award. Leave it to this music chart-topper to handle such an unexpected gaffe with grace. It’s just a shame her regal trail of purple feathers suffered fell victim to an unsuspecting sole! Luckily, Nicki didn’t suffer a fashion faux pas last night at the E! Entertainment, ELLE and IMG New York Fashion Week Kick-Off Party on Sept. 5. There was nothing to step on, as Nicki wasn’t wearing any pants! The Queen Radio host covered up a seductive set of lingerie with just an oversized blazer by Off-White and the edgy brand’s matching belt. We can’t wait for how else Nicki will surprise us throughout New York Fashion Week, whether it be by a fierce look or another wardrobe malfunction. We don’t care — we stan! NYFW runs from Sept. 6 to Sept. 12.
Other celebrities and models stunned us tonight at the the Daily Front Row awards. The supermodels especially shined brighter than usual, thanks to their choice in fabric! Gigi Hadid, Irina Shayk and tonight’s honoree, Winnie, all wore metallic dresses. Taylor Hill differed from the pack in a fringe dress — although laden with silver details too — fit for Jay Gatsby’s dance floor! If you want to see even more models slay at NYFW, you need to catch up on our recap covering the first runway event of the week, which was put on by Tom Ford!