Bye-bye, Ben Simmons? Not three nights after they were spotted at dinner with friends, Kendall and Anwar went out AGAIN — this time with Bella and Gigi. Seems serious…

How many times do Kendall Jenner, 22, and Anwar Hadid, 19, have to hang before they confirm that their romance is real? Although the last time we saw any PDA from these two was three months ago, they’ve recently been spending a lot of time together. They had dinner at Cipriani while in town for New York Fashion Week on Sept. 6, and it was a family affair! Both of Anwar’s older sisters, Gigi, 23, and Bella, 21, were there, as well as musician Semi Haze. And just three nights before that, they went out with a few friends in Malibu. We’re talking cross-country hangs! In the wake of rumors about Kendall’s split from NBA player Ben Simmons, 22, this constant contact with Anwar seems like the nail in the coffin, if you ask us.

But does their New York dinner date, which ended at 1Oak, mean what we think it means? Ever since Kendall and Anwar first publicly hooked up, we’ve been dying to know whether Bella and Gigi approve of this pairing — and all signs point to yes! Not only do they seem to love hanging with the couple, but a source close to Bella told Hollywoodlife.com EXCLUSIVELY, “Bella would completely support a relationship between her BFF Kendall and brother Anwar. Bella already loves Kendall like a sister, but the thought of Kendall potentially ending up a sister-in-law one day would be a dream come true for her.” We just hope Gigi’s on the same page! Seems like a win/win situation.

And can we just say, we hope they keep hanging out because they made for such a well-dressed group. 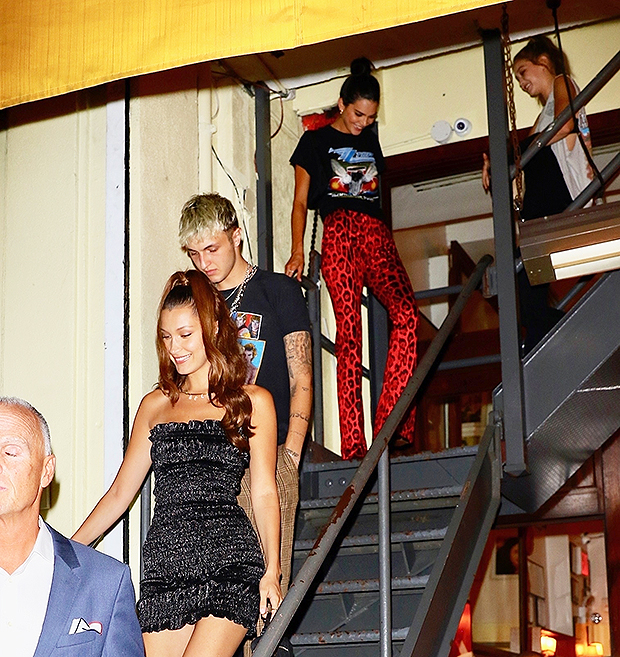 Between Kendall’s red animal print pants, Bella’s glittery mini dress and Anwar’s graphic tee, we didn’t know who was serving the most style inspo. Our favorite accessory, though, was the big ol’ smile on Kendall’s face. The model looks happy!