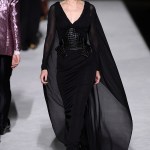 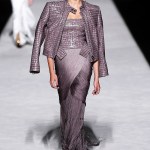 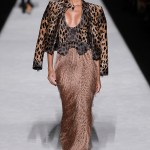 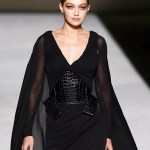 Crocodile jackets, chiffon trains, and flirty fringe ruled the runway at Tom Ford’s Spring 2019 show. See pics of models like Gigi and Kaia walking in front of major stars below!

Tom Ford held one of the first major shows of New York Fashion Week on Wednesday, September 5, and it was star studded! Major models like Gigi Hadid, Kaia Gerber, Joan Smalls and many more looked gorgeous, showing off designs in the Spring/Summer 2019 runway show. Their smudged, smokey eye makeup was by makeup lead Diane Kendal using Tom Ford Beauty, and hair legend Orlando Pita was in charge of the sleek buns and chic head wraps. Gigi showcased an all-black look with a dramatic chiffon train, that she really worked on the runway. Kaia was pretty in purple, rocking a fringed skirt that swished with every step. See pics from the runway and stars in the front row in the gallery attached above.

The front row was packed with celebs like Cardi B, who wore a stunning black dress and the HARMONY VELVET Black Velvet 3-Strap Sandals by Giuseppe Zanotti. Also in the front row — Tom Hanks and wife Rita Wilson, Hailee Steinfeld, Paris Jackson and more. Hailee wore “a black jumpsuit with velvet peak lapel and crystal belt and cuff detail, mini zebra embroidered Natalia bag with crystal pave’ turnlock, and velvet slim square toe pump with crystal heel,” according to the brand. Adriana Lima was stunning in a white top, and white mini skirt. Who said you can’t wear white after labor day?

After seeing the models rock the runway, Tom threw an after-party to celebrate his TOM FORD Lips & Boys collection, at the Park Avenue Armory in NYC. Full of A-listers, it was the place to be on a Wednesday night!