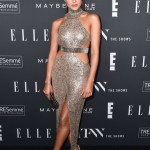 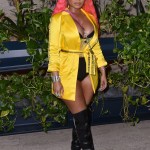 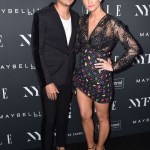 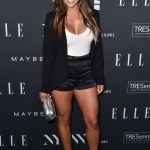 It’s officially fashion week! The celebs are out and about and supers like Nicki, Ashlee and many more stunned at the ELLE & IMG Party on Sept. 5. See their sexy outfits here!

When you’re a celebrity, you can wear anything, and we saw some fabulous fashion at the NYFW Kick-off party, hosted by E! Entertainment, ELLE and IMG. Held at The Pool on Park Avenue in New York City, the party celebrated “Super Models and Super Trends.” And even though music, not catwalks, are Nicki Minaj’s and Ashlee Simpson’s claims to fame, they certainly dressed for the theme! Nicki made the party grounds her runway in knee-high boots and seductive lingerie, only to be covered with a stylish Off-White blazer and the Italian label’s matching belt. Meanwhile, Ashlee showed up on the arm of husband Evan Ross, but on her own arms hung transparent sleeves embellished with pretty designs. She accessorized with Djula white diamond hoop earrings and rings. Some of our favorite models like Olivia Culpo, Ashley Graham, Hailey Baldwin and many more were also at the party, and showed off equally trendy looks.

Hailey was just in Shanghai for Tommy Hilfiger’s Fashion Show. If she is jet-lagged, you’d never know! Karlie Kloss was there as well, showing off her mile-long legs. She appears in a new holiday campaign for Carolina Herrera‘s GOOD GIRL fragrance, and she looks like Jessica Rabbit in a sexy red dress! Singer Charli XCX, model Charlotte McKinney, actress and entrepreneur La La Anthony, and Paris Jackson were all in attendance at the party. It was definitely a who’s who event, as guests mingled with other A-listers!

New York Fashion Week runs from September 6 to September 12. We hope to see some of our favorite models like Kendall Jenner and Bella Hadid hit the runway! We already saw Bella’s older sister, Gigi, walk in Tom Ford’s Spring 2019 Ready-To-Wear collection at the first NYFW show this season on Sept. 5. Trailing her footsteps on the catwalk was another big name in the modeling industry, Kaia Gerber. Far from spring’s typical pastels, both models wore scaly accents and neutral colors. Seeing Gigi and Kaia help kick off NYFW gave us the same giddy expression as Cardi B, who looked ecstatic to be at the Tom Ford show. Also in attendance was Paris Jackson, who showed off her tatted arms in a beautifully-detailed tube dress!

We can’t wait for the NYFW festivities to really get underway. Tomorrow’s schedule includes shows by Rag & Bones and Jeremy Scott.