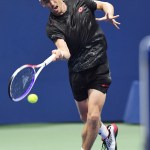 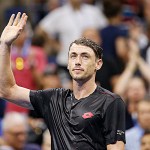 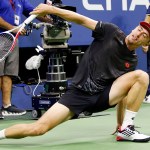 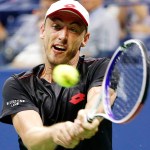 In the biggest shocker of the 2018 US Open – so far – No. 55 ranked John Millman eliminated the iconic Roger Federer. As the sports world recovers from being SHOOK, get the info on John.

1. He’s an Australian out of Brisbane. John has been playing professional tennis since 2008. The Brisbane native worked his way up the rankings, cracking the world Top 200 in 2013. Two years later, he’d break the Top 100 with a rank of 92. His record, as of publication, is 44-58 (while Roger, the man John beat, is at 1168-256. Put that in perspective.) While this might not be the biggest upset in Tennis, John beating Roger is pretty amazing. Not bad for a man who, four years ago, was working for a mortgage brokerage firm to make ends meet, per The Guardian.

“I’m probably in a little bit of disbelief,” John said after the match. “I have so much respect for Roger and everything he’s done for the game. He’s been a hero of mine and today he was definitely not at his best but I’ll take it.

2. He’s not afraid to speak his mind on politics. During the political shake-up that saw Scott Morrison become Australia’s sixth prime minister in under a decade, John weighed in on the Peter Dutton, who failed to win the Liberal (which is really conservative) party’s support. “I’m a proud Queenslander… but not sure Peter Dutton is the answer…,” John tweeted, per The Guardian. “I just found some of his immigration policies detestable, his absence in attending the apology to the stolen generations a blight against any future runs at PM and the fact that I can’t trust someone who said four days ago that he fully supports the current PM.”

3. He’s a fan of American football. It’s 1 o’clock now,” John said during his on-court interview after defeating Roger Federer. “I probably should try to get a recovery. I’ve got a 7 o’clock in the morning fantasy draft. So I’m going to get up for that, and hopefully, I’ll have a good draft. I’m second pick. I don’t know whether to go [Todd] Gurley or Le’Vonn Bell.

Was only a little bit happy making the fourth round of the US Open. @lottosport @tecnifibre @bluestonelane #sweet16 #nyc #usopen 😲🎾

4. John also has a variety of interests. In addition to loving American football, John’s favorite bands are The Killers and Temper Trap. He also supports Liverpool (the football/soccer club) and can “tie a knot in an Allen’s snake lolly,” according to The Guardian, which must be as impressive as it sounds. Hopefully these skills help him out in the quarter-finals because it won’t get any easier. John faces Novak Djokovic, 31, and this “Cinderella” story might be over before it even started.

5. John won because he was able to handle the heat, according to Roger. “I just thought it was very hot tonight,” Roger said after the loss, per the Express. To be fair, the temperature in New York City, home for the U.S. Open, was up in the late 80s F. “Was just one of those nights where I guess I felt I couldn’t get air. There was no circulation at all. I don’t know, for some reason I just struggled in the conditions tonight. It’s one of the first times it’s happened to me.”