From royal faux pas to fashion faux pas, Meghan Markle’s choice of power pantsuits has the Queen less than thrilled. Find out why!

While Duchess Meghan Markle has done a good job adapting to royal life, the one thing she can’t grasp is Queen Elizabeth‘s strict list of do’s and don’ts when it comes to fashion. One of the Queen’s preferences is that the women of the family wear dresses or skirts, but Meghan, as we’ve seen, enjoys the occasional pantsuit. Meghan “has found certain rules in the royal household difficult to understand, like the fact that the Queen prefers women in dresses or skirts rather than trouser suits, and is often asking [Prince] Harry why things have to be done in a certain way,” an insider told PEOPLE. “I think she finds it a little frustrating at times, but this is her new life, and she has to deal with it.”

Meghan first rocked a pantsuit after her royal wedding when she attended Wimbledon with sister-in-law Kate Middleton. There, she wore white slacks paired with a blue striped button-down shirt, while the Duchess of Cambridge opted for a dress. Then, on the Royal Tour of Ireland with Prince Harry, Meghan wore a Givenchy power suit, much to the Queen’s dismay. Meghan donned another black pantsuit today, Sept. 4, to attend the WellChild Awards. For the event, she stunned in a fitted pantsuit by Altuzarra paired with a black blouse by Deitas. 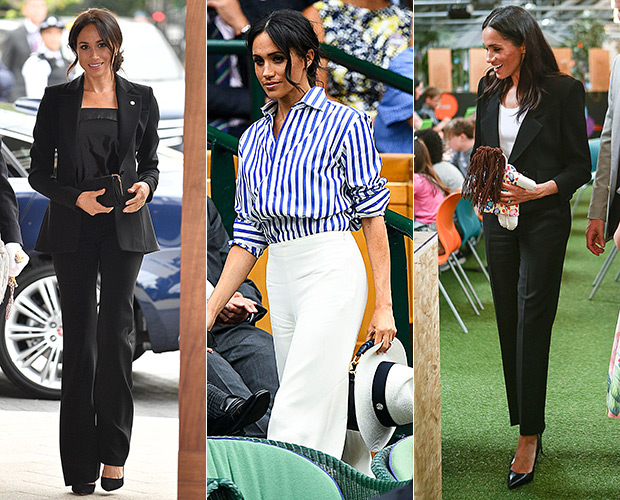 Meghan has conformed to the life of a royal throughout the summer, adopting the “duchess slant,” and carrying small clutches to events, instead of a large handbag, but she is struggling to abide by the Queen’s wishes when it comes to her fashion. However, Meghan isn’t the first royal to wear trousers. “If you go back and look at royal pictures over the last 20 to 30 years and at any given time you’ll see the Duchess of Cambridge certainly in trouser lots of times. Princess Diana wore a tuxedo suit on several occasions,” Royal commentator Victoria Arbiter told BAZAAR.com. While the Queen prefers dresses and skirts for herself, and for the women in the family, there is no “rule book,” Arbiter continued. She added that Meghan, Kate and the other women in the family choose their outfits based on what the occasion calls for, and if they will be in the Queen’s presence. “As far as I can see, Meghan has been perfectly, appropriately dressed for each event that she has gone to,” Arbiter said. We’re loving her looks, as well!