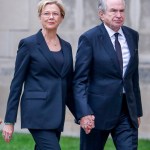 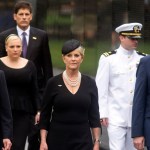 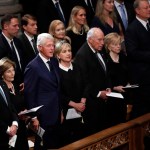 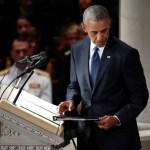 Meghan McCain was defended by Senators Joe Lieberman and Lindsey Graham for her stinging takedown of Donald Trump at John McCain’s funeral. Here’s what they said.

Meghan McCain didn’t pull any punches during her eulogy at her father John McCain‘s funeral — especially when it came to her evisceration of Donald Trump, a man who stubbornly refused to call her father a hero.  While she’s received some backlash online from trolls and Trump supporters alike, she’s being supported and defended by two of her father’s close friends. Senators Joe Lieberman and Lindsey Graham not only discussed the inclusion of Ivanka Trump and Jared Kushner on CNN’s State of the Union on Aug. 2, they also talked about Meghan’s Trump jabs. “She’s a beautiful talented young lady; she is her father’s daughter. If you say something about her dad you will know it, whether you’re the janitor or the president of the United States,” Graham said of Meghan.

In the end, Graham greatly respected her speech. “She is grieving for the father she adored and I think most Americans understand that and I am just so proud of the young lady she has become,” he added. “So I’m totally OK with everything.”

Senator Lieberman echoed Graham’s review of Meghan’s remarks. “Yesterday, I was a very proud uncle,” he said. “Meghan is a daughter who had a very special, close relationship with her father, John McCain. So, he’s gone, he’s died, she’s grieving, and yet by the nature of his life, she’s called on to make a very public, global statement and appearance. Very hard. But she did it and she did it magnificently. She did it the way her dad would want her to do it, she was direct, the way John was.”

Meghan’s diss aimed at Trump was all to do with the president remarks in which he infamously said, “I like people who weren’t captured. “We gather to mourn the passing of American greatness, the real thing, not cheap rhetoric from men who will never come near the sacrifice, those that live lives of comfort and privilege while he suffered and served,” she said at John McCain’s funeral. In response, Trump tweeted, “MAGA!”