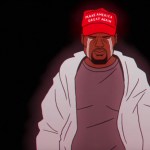 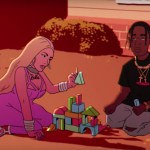 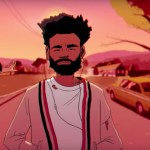 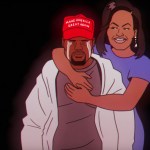 Childish Gambino portrayed Kanye West as a weeping Trump supporter getting hugged by Michelle Obama in the animated music video for ‘Feels Like Summer’! Watch it here!

Childish Gambino is always providing the most fire music video. Coming off the heels of his layered, poignant and wonderfully subversive This Is America video, Gambino just released the gorgeously animated music video for Feels Like Summer — and it’s already making waves for an epic Kanye West diss. About halfway through the song, around the second minute mark, you can see an animated Kanye weeping with a MAGA hat on, while he get a huge hug from none other than former first lady Michelle Obama.

But Kanye isn’t the only one getting ever so slightly trolled in the in this oddly relaxing music video. Also pictured are none other than Nicki Minaj and Travis Scott, who are busy building a block house, when Travis takes a block out from under her. This obviously references the fact that Travis scored the number one album position for Astroworld going up against Minaj’s Queen — something that led to Nicki going on a Twitter rant about just before the VMAs.

Other of the references in the music video feel much more lighthearted. At one point, Dr. Dre, Diddy, Snoop, Whiz Khalifa and Jay-Z dance on a lawn, while Gucci Mane lounges. SZA and Janelle Monae go skateboarding. J. Cole hoses down Rae Sremmurd, who both are sporting supersoakers. And that’s not even scratching the surface. Check out all of the references by watching the entire music video below.

We’ll keep you posted on whether Kanye or Nicki respond to these digs. In the meantime, check out all of the rappers seen in Gambino’s new music video in our gallery above.